Premiere at the Siemens Pavilion: 105 years of electromobility in Berlin 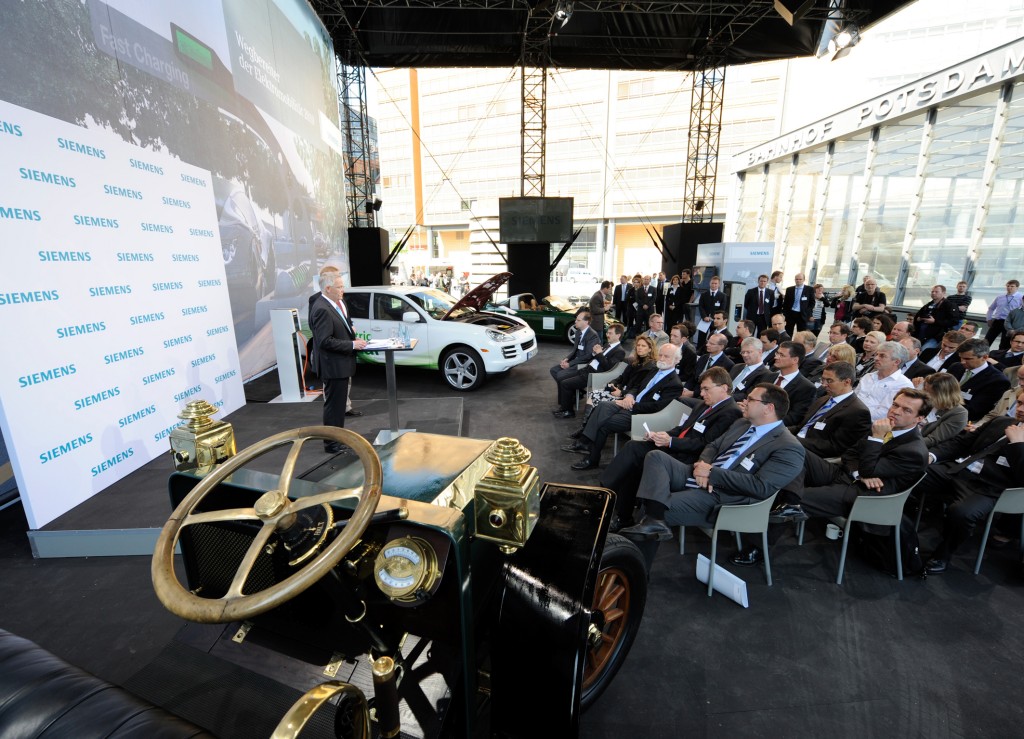 “We consider electromobility to be especially important and intend to play a major role in shaping this market in partnership with both the automobile industry and power utilities,” emphasized Wolfgang Dehen. “These industries will converge as electromobility spreads. No other company has so many products and solutions for the electromobility process chain as Siemens – ranging from power generation and smart grids to charging systems and electric drives for the vehicles themselves. We are moving rapidly into a new electricity age – and Siemens will be helping to shape it.”
The accelerating world population, ever-scarcer natural resources and global climate change are forcing people everywhere to question old habits – also in regard to mobility. On the way toward sustainable mobility, electricity offers the best solution, for it is more efficient and safer than other energy sources. The energy efficiency of an electric car is twice as high as that of vehicle using a combustion engine. Moreover, environmentally friendly and low- or carbon-free electricity in a sustainable energy mix can be generated in wind farms or solar power plants. In addition, electric cars can support the development of renewable energies, since their batteries can serve as temporary storage units. This would help solve the problem that renewable energy sources continue to deliver electricity even when it is not needed, such as at night. Car batteries could be charged with this excess power and later, when demand increases, feed the electricity back into the grid.
“Worldwide, there are around one billion motor vehicles and they contribute nearly one-fifth of the world’s CO2 emissions. Emerging markets like China are therefore strongly supporting and promoting sustainable mobility with electric vehicles. This also applies to battery technologies and the construction of smart grids,” noted Richard Hausmann, designated project head of “Smart Grid Applications” at Siemens. As CEO of Siemens in China and Southeast Asia, Hausmann followed the development of electromobility in these dynamic markets and will now draw on his experience for the company’s comprehensive project.
The Electric Victoria – Electromobility pioneer in Berlin
Siemens can draw on a long heritage of expertise and experience in the field of electromobility. As early as the dawn of the 20 century, the company did pioneering work in this field – right in Berlin. This included the construction of the first electric tram, the first metro in Berlin at Potsdam Railway Station, and the first electric traffic signal in Germany. Beginning in 1905, the “Electric Victoria” was built in the Berlin Siemens-Schuckert Plant – and was the first electric car in the city. Fifty of them were used daily as elegant hotel taxis and delivery vans. The cars could run at speeds up to 30 km/h and had a range of 80 kilometers per battery charge. Commissioned by Siemens, Hubert Drescher Karosseriebau in Berlin reconstructed this electromobility pioneer down to its last details within ten months.
And today Siemens is once again a pioneer in electromobility, whether with demonstration vehicles like the eRUF sports car or an electric motorcycle, or as partner in a number of national and international projects studying the integration of electric cars in power grids, such as the EDISON Project in Denmark, Harz.EE-mobility, or special projects with automobile manufacturers and power utilities in Berlin and Munich.

Siemens AG (Berlin and Munich) is a global powerhouse in electronics and electrical engineering, operating in the industry, energy and healthcare sectors. For over 160 years, Siemens has stood for technological excellence, innovation, quality, reliability and internationality. The company is the world’s largest provider of environmental technologies, generating €23 billion – nearly one-third of its total revenue – from green products and solutions. In fiscal 2009, which ended on September 30, 2009, revenue totaled €76.7 billion and net income €2.5 billion. At the end of September 2009, Siemens had around 405,000 employees worldwide. Further information is available on the Internet at: www.siemens.com.
Read more
Reference Number: