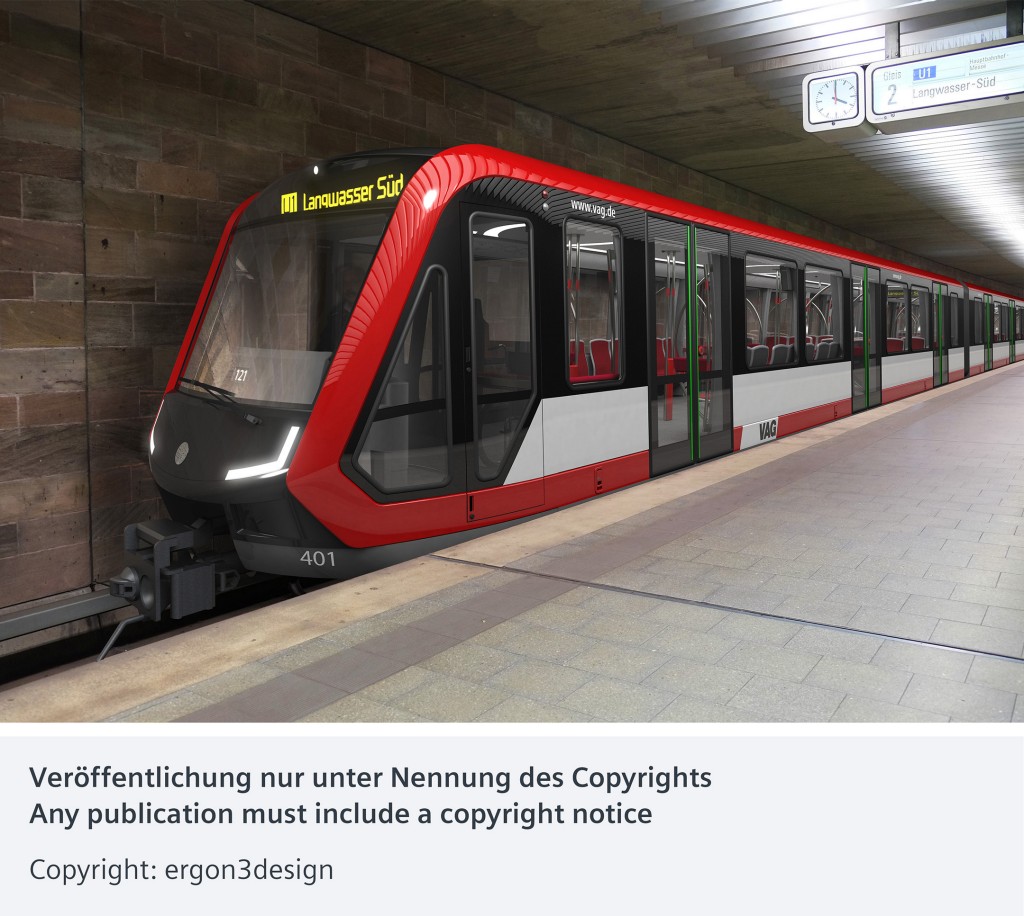 Michael Richarz, Head of technology and operation at the VAG, expressed his satisfaction with the outcome of the award process: "We're pleased that we have Siemens as a partner at our side. Siemens not only has worldwide experience of rail vehicle manufacture, but is also very familiar with the conditions here in Nuremberg. After all, Siemens was the general contractor for the automation of our U2 and U3 metro lines."
Jochen Eickholt, CEO of the Mobility Division at Siemens, said: "We've been working with the VAG for many years. So we were even more pleased when the negotiations ran successfully for us, and we could win another order to supply metro trains. The G1 type will give the VAG a train that is based on proven technology and has been developed by an experienced local team."
The U1 line is the oldest of Nuremberg's three underground lines and is operated conventionally. It is also the longest and the most heavily frequented. It runs from Langwasser Süd via the Exhibition Center, Nuremberg Main Station and Plärrer to Hardhöhe Station, the current most westerly terminus of the line in the nearby city of Fürth. The line has an overall length of 18.5 kilometers and serves 27 stations. Ridership rises sharply when visitors come to major events, such as the Nuremberg Christmas Market and trade fairs. On weekdays, this line is mainly used by commuters.
The G1 meets these demands. Barrier-free boarding and exiting will be made even easier as the new trains have wider doors with extendable door steps to bridge the gap between car and platform. The passenger areas will offer end-to-end accessibility. In contrast to the four driver's cabs on the present Nuremberg metro trains, these new trains will have only two cabs. They will also be pre-equipped for fully automated operation, with driver's cabs designed to permit easy removal.
The eco-friendliness of the G1 will also help the City of Nuremberg reach its climate targets. Environmental protection begins at the production stage of these new G1 trains. All Siemens plants are certified according to the strictest environmental standards and all the materials used are tested for their environmental compatibility. The weight of the empty train is lower, which reduces the consumption of operating power. Braking creates energy that is recovered and used either by the train's own auxiliary equipment, such as to heat or ventilate the passenger areas, or by other trains that are running in the metro system. The interior and exterior lighting uses LED technology, which also reduces the energy consumption. At the end of their service lives, the trains can be recycled to a degree of 94.5 percent.
The VAG currently has a total of 100 two-car units in service with Siemens technology. In November 2001, the operator awarded Siemens AG an order to equip the U2 and U3 metro lines for fully automated operation and to supply 30 two-car automatic type DT3 trains. As of 2010, VAG has also received another 14 type DT3-F trains to replace its oldest DT1 trains and to serve the further extension of the U3.

This press release and press pictures are available at:
www.siemens.com/press/G1-Nuremberg
For further information on the Mobility Division, please see: www.siemens.com/mobility