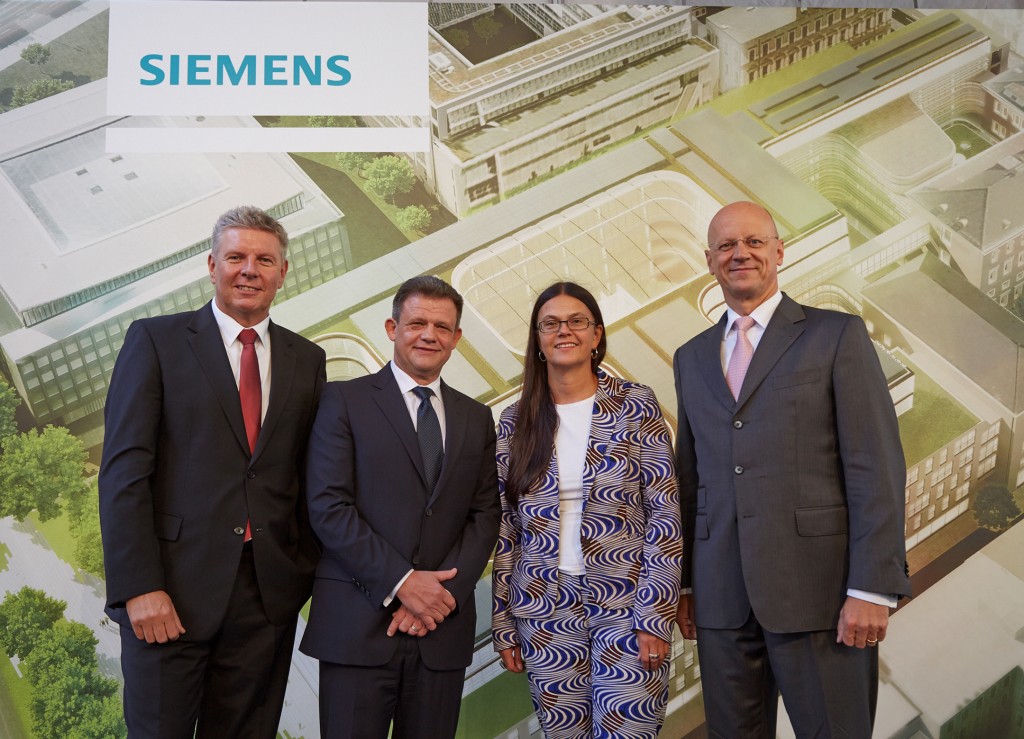 The future company headquarters symbolizes Siemens' identity as a cosmopolitan, innovative and transparent company. "Our new headquarters will be a place where people from all over the world can meet and where the focus is on cooperation," said Siemens CFO Dr. Ralf P. Thomas. The new headquarters would open its doors and be freely accessible to the general public across large areas of its ground floor. For its employees, Siemens is creating a flexible, inspiring working environment and for Munich's residents an attractive inner city district.
Munich Mayor Dieter Reiter praised the decision to keep the company's headquarters in the heart of the city as reflecting a strong commitment to Munich. "The plans for the new Siemens headquarters at Wittelsbacherplatz are a prime example of how such an ambitious construction project can be harmoniously integrated into an historic urban ensemble. The publicly accessible company headquarters will link the old city of Munich with its museum district, enabling the new, extremely energy-efficient complex to make a valuable contribution to a sustainable urban development," said Reiter.
Prof. Dr. Elisabeth Merk, who heads Munich's Urban Planning Department, also had words of praise for the close collaboration and the construction site management. Right from the start, she noted, exemplary processes at the construction site had minimized the burden on the neighborhood.
Zsolt Sluitner, head of Siemens Real Estate (SRE), emphasized that the large-scale project was fully on schedule. Part of this success was due, he said, to the close cooperation with the city of Munich, nearby residents and, in particular, the group of about 250 construction workers who had been employed on the site in recent months. Since construction of the building shell began about a year ago, 6,000 tons of reinforcing steel have been anchored and 40,000 cubic meters of concrete have been poured.
The new company headquarters will feature a bright, open design throughout. The facility is meant to serve as a place for customers and employees to meet while creating a new connection between the city's historic center and the museums and art galleries of its Maxvorstadt district.
Together with the city, Siemens has succeeded in implementing the concept of a new building that has been carefully designed to fit into an existing cityscape, blending tradition with the future. The history enshrined in the Palais and the new building's contemporary character complement each other to form an extremely energy-efficient building complex in keeping with the most advanced standards worldwide.
The façade work and interior construction will begin immediately after the topping-out ceremony. In parallel, the 300-meter-long soundproofing wall will be taken down in phases between now and the spring of 2015, because neither construction noise nor dust will escape through the glass façade to the outside. The new Siemens headquarters are to be completed by the end of 2015. Opening is planned for the spring of 2016.

Siemens AG (Berlin and Munich) is a global powerhouse in electronics and electrical engineering, operating in the fields of industry, energy and healthcare as well as providing infrastructure solutions, primarily for cities and metropolitan areas. For over 165 years, Siemens has stood for technological excellence, innovation, quality, reliability and internationality. The company is one of the world's largest providers of environmental technologies. Around 43 percent of its total revenue stems from green products and solutions. In fiscal 2013, which ended on September 30, 2013, revenue from continuing operations totaled €74.4 billion and income from continuing operations €4.2 billion. At the end of September 2013, Siemens had around 362,000 employees worldwide on the basis of continuing operations. Further information is available on the Internet at: http://www.siemens.com.
Read more
Reference Number: