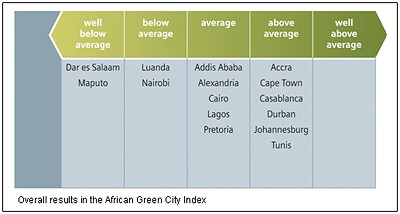 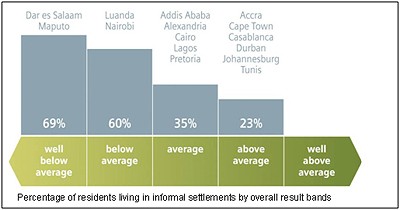 The African Green City Index examines, for the first time, the environmental performance of African cities in eight categories: energy and CO2, land use, transport, waste, water, sanitation, air quality and environmental governance. The overall result of the study shows that none of the 15 cities rank in the highest band 'well above average'. "Even the best performing cities in Africa have room to improve their environmental footprint," said Delia Meth-Cohn, Editorial Director for Continental Europe, Middle East and Africa at the EIU. Six cities, mainly from the north and the south, scored 'above average', five cities are in the 'average' band, two cities are 'below average' and two cities rank in the lowest band, 'well below average'.
Whereas South African cities scored high on governance and implementing policies, cities from northern Africa are strong in connecting residents to basic infrastructures like water and electricity. In contrast, all sub-Saharan cities, except South African cities and Accra, struggle in the Index. Their immediate focus on providing basic services tends to prevent a focus on long-term sustainability. However, experts agree that sustainable development policies at city level are far from being a 'nice-to-have option', but must go hand-in-hand with solutions to the continent's social and economic problems.
Africa is urbanizing faster than any other continent in the world
The study also reveals that there is a strong correlation between a city's environmental performance and the percentage of residents living in informal settlements. The fewer residents in a city living informally, the better the city performs. This is crucial for Africa which is urbanizing faster than any other continent and, as a result, is suffering from unplanned urban sprawl. The number of Africa's urban residents more than doubled in the last two decades and they now account for 40 percent of the continent's population. Africa has the world's highest proportion of city dwellers in informal settlements. Among the 15 Index cities, the average percentage of the population living in informal settlements is nearly 40 percent, ranging from an estimated 15 percent in Casablanca to an estimated 70 percent in Maputo.
Good governance is key
The African Green City Index suggests that good governance is key to environmental performance. The institutional ability to run a city efficiently and intelligently matters more than wealth or the level of economic development. This is contrary to the findings in other Green City Indexes Siemens has published so far which frequently demonstrated a link between wealth and better environmental performance. This suggests that in Africa, a continent where many cities may wait decades for the kind of wealth levels common in other regions of the world, governance is a powerful tool for better environmental performance. A good example is Accra, the capital of Ghana, the only sub-Saharan city (excluding South African cities) that placed above-average in the African Green City Index. It has strong scores for environmental management, with structures in place to work with the national government in implementing policies.
Siemens is the ideal partner for sustainable city development
With its Environmental Portfolio, Siemens is the ideal partner for sustainable city development, which is based on energy and resource efficiency. The company has the largest and most comprehensive range of green technologies for the environmentally friendly development of infrastructure – from efficient and clean energy generation, transmission and use to public transport and water treatment systems. In fiscal 2011 alone, the company generated revenue of around €30 billion with its Environmental Portfolio. Siemens has received various orders to support the sustainable development of Africa's urban infrastructure. For example, in Johannesburg and the greater Gauteng region of South Africa the Passenger Rail Agency of South Africa awarded Siemens a contract for the construction of a new Gauteng nerve center for centralized rail traffic management. The new rail signaling and train protection system will increase the operational capacity, provide a higher level of flexibility and safety, and reduce train delays. To support the expansion of Siemens' Environmental Portfolio in Africa, the company will create 500 new green jobs on the continent in the coming years.
The scope of the Green City Index is unique in the world. Africa is the fifth region that has been analyzed for Siemens by the EIU. The series began in 2009 with the European Green City Index, which identified Copenhagen (Denmark) as the greenest metropolis. In 2010 this was followed by the Latin American Green City Index, where Curitiba (Brazil) came out on top. In 2011, Siemens published the Asian Green City Index with Singapore placing first, as well as the Green City Index for the U.S. and Canada, led by San Francisco.
Further information and the detailed results of the study can be found here:
www.siemens.com/press/greencityindex​

Siemens AG (Berlin and Munich) is a global powerhouse in electronics and electrical engineering, operating in the fields of industry, energy and healthcare as well as providing infrastructure solutions, primarily for cities and metropolitan areas. For over 160 years, Siemens has stood for technological excellence, innovation, quality, reliability and internationality. The company is the world's largest provider of environmental technologies. Around 40 percent of its total revenue stems from green products and solutions. In fiscal 2011, which ended on September 30, 2011, revenue from continuing operations totaled €73.5 billion and income from continuing operations €7.0 billion. At the end of September 2011, Siemens had around 360,000 employees worldwide on the basis of continuing operations. Further information is available on the Internet at: http://www.siemens.com.
Read more
Reference Number: