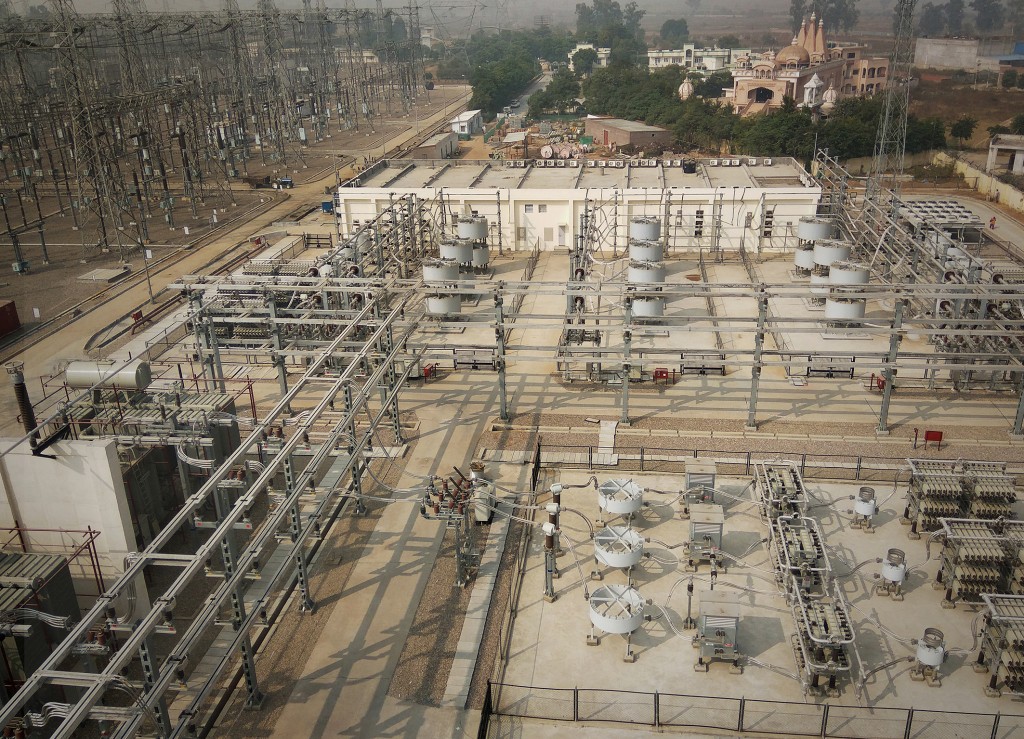 The picture shows the Siemens SVC systems in India.

"With the Static Var Compensator in Ludhiana, which has a potentially record-breaking reactive power control range of one GVAr, we have successfully put into operation the largest SVC that we have built up to date. So we are further at the top of technology in this area as well," said Ralf Christian, CEO of the Siemens Energy Management Divison. Mirko Düsel, CEO of the Siemens Transmission Solutions Business Unit: "It was also an important step that in this three-SVCs project in one of the largest markets in the world for flexible AC transmission systems, the thyristor valves and the protection and control systems for the SVCs were manufactured and tested locally in our own factories."
"It gives us immense pride that the world's largest swing SVC with a reactive power range of one GVAr has been commissioned at our Ludhiana site in India. The commissioning of these SVC is another step in improvement of power quality and enhanced stability of the Indian grid. We appreciate the efforts made by Siemens to achieve this milestone", said I S Jha, Chairman and Managing Director of the Power Grid Corporation of India.
The three 400-kV SVC systems at the Ludhiana (-400/+600 MVAr), Kankroli (-300/+400 MVAr) and New Wanpoh (-200/+300 MVAr) substations not only provide inductive or capacitive reactive power for the high-voltage grid in normal static operation. Depending on the grid fault situation, they also dynamically supply the reactive power required in order to reliably counteract grid undervoltages or overvoltages in the shortest possible time. The SVC systems also provide the reactive power to enable the transmission voltage in the grid and in the substations to be maintained at an optimum value. The SVCs thus enhance the transient and dynamic stability of the power supply grid.
Siemens carried out this order for the Indian network operator with a high degree of local content. The key to this was a comprehensive transfer of know-how and expertise with a sophisticated training concept. For example, the protection and control system cabinets of the three Static Var Compensation systems were manufactured in Kalwa, Mumbai, at the Siemens factory for network automation components. The protection tests of the cabinets were conducted by their engineering team located at the factory in the Indian state of Goa. The functional and dynamic tests on the three SVC protection and control systems itself, which took several months, were carried out for the dynamic simulation test laboratory of the newly built Siemens facility located in Goa as well. This factory builds up the second and very important part of the localization. The thyristor valves for the SVC in New Wanpoh were manufactured and routine tested as this factory for the first time. The thyristor valves of the two other systems Ludhiana and Kankroli were sourced from Nuremberg, Germany.
Together with its high proportion of local engineering and local production, this order from the Power Grid Corporation of India smoothed the way for an additional order for Siemens from the Indian power supplier. It comprises the design, engineering, installation and commissioning of four Statcom systems of the SVC Plus series worth around EUR 78 million.
Reactive power compensation technology is a subset of flexible alternating current transmission systems (FACTS). These systems can regulate the parameters that determine the operation of a power supply grid and account for the quality of transmission. Such parameters include transmission impedances, currents, voltages and phase angles between the different nodes. Reactive power compensation is divided into parallel compensation and serial compensation. While series compensation is primarily used to increase the power transfer capability on transmission lines, parallel compensation systems as SVC and Statcom systems primarily regulate the voltage at the connecting point and thus facilitate a stable, reliable grid operation.