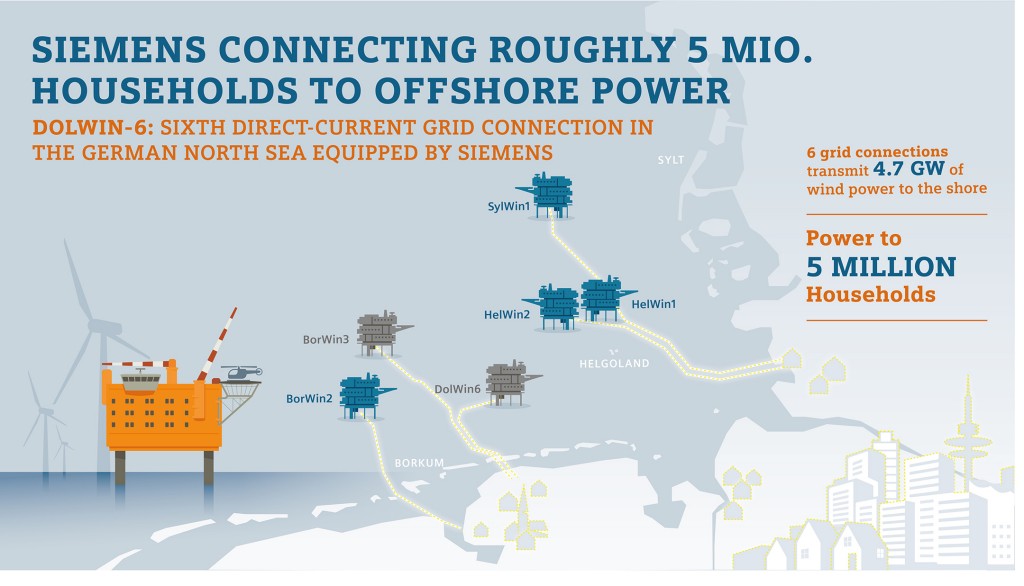 "DolWin6 marks a new milestone for the success of the energy transition. We are very pleased with the new order from TenneT for an offshore grid connection in the German waters of the North Sea," said Ralf Christian, CEO of Siemens' Energy Management Division. "This makes Siemens the technology partner in six DC projects. After BorWin3 and DolWin6 are commissioned, approximately 4.7 gigawatts of electrical power will be converted and transmitted to shore using Siemens technology alone. This is enough to supply just under five million homes."
Siemens will supply the entire technology for efficient high-voltage direct-current transmission (HVDC) and will use DC CS direct-current compact switchgear for the first time. The new gas-insulated switchgear for 320 kilovolts (kV) requires as much as 95 percent less space compared to the current air-insulated solutions. If they are used on an offshore platform, the size of the platform can thus be reduced by approximately 10 percent. As a result, Siemens is significantly helping to lower the cost of grid connections for offshore wind farms and thus to the cost parity of offshore wind energy in general. The switchgear is manufactured in Siemens' switchgear factory in Berlin. Other components, such as HVDC transformers and converters for converting current, are produced in Siemens' factories in Nuremberg. The offshore platform is being built by our partner Dragados in Cadiz, Spain, and will then be transported to its installation site. Siemens will be responsible for complete construction of the HVDC onshore station in Emden, East Frisia, where the company already built the onshore converter for the BorWin3 direct-current connection earlier this year.
The DolWin6 grid connection, which is around 90 kilometers in length, can connect multiple offshore wind turbines to the mainland. A number of offshore wind farms are competing for a connection to DolWin6 in an auction held by the German Gederay Network Agency. The Gode Wind 3 project has already been awarded a contract, and additional offshore wind warms will bid on the coveted grid connection in the next round of the auction. The 155 kV alternating current supplied by the wind turbines will be converted into 320 kV direct current on the DolWin6 offshore platform and transported to Hilgenriedersiel on the mainland via a 45-kilometer subsea cable. On the ocean, the cable will pass underneath the island of Norderney by means of horizontal bore holes. Once on land, the electricity will be transported by another 45-kilometer underground cable to Emden, East Frisia, where Siemens is building another converter station for converting the direct current back into three-phase current and feeding it into the high voltage grid.
The HVDC Plus converter technology used by Siemens is a voltage-sourced converter of a modular multilevel converter design (VSC MMC). As a pioneer in VSC-MMC systems, Siemens is the technology leader in this field. In contrast to the classic HVDC variant, which can be used only in grids with sufficient short-circuit power, systems equipped with HVDC Plus facilitate the black start of island grids. This is an important prerequisite for operating the offshore grid. The modular VSC technology reduces complexity and thus the space required by the machines, which is essential particularly for use on offshore platforms. HVDC Plus also ensure an almost ideal sinusoidal alternating voltage and a smooth voltage in the direct voltage circuit. This eliminates the need to use harmonic filters.
Siemens is now implementing a total of six DC North Sea grid connections for TenneT. The earlier projects were HelWin1 (576 MW) and HelWin2 (690 MW) off the coast of Helgoland, BorWin2 (800 MW) off the coast of Borkum and SylWin1 (864 MW) off the coast of Sylt. These grid connections have been placed into service successively since 2015; the BorWin3 (900 MW) and DolWin6 (900 MW) are currently being executed. The grid connections equipped with Siemens technology now have a total transmission power of 4.7 gigawatts – enough to supply just under 5 million homes.