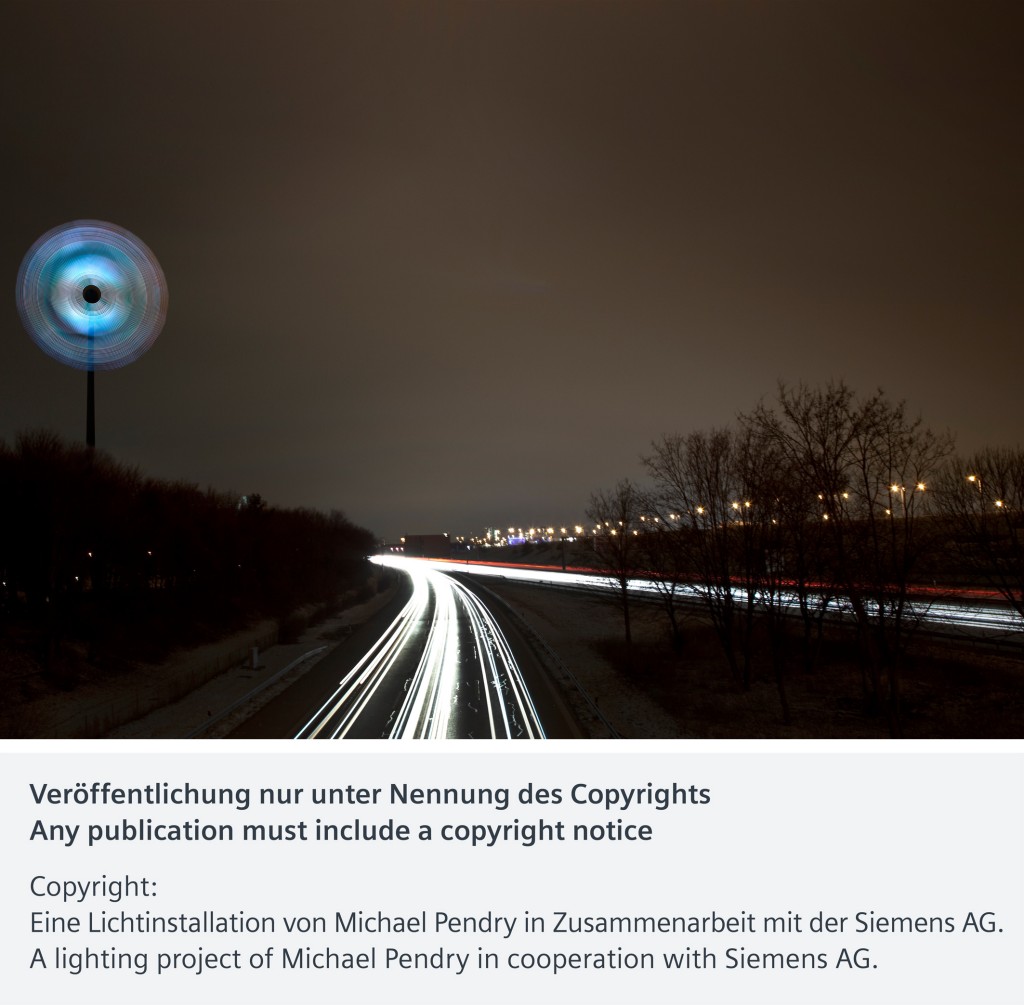 In the fall of 2008, Siemens representatives and Munich multimedia artist Michael Pendry first discussed the possibility of creating a shining symbol for green technologies and sustainability prior to the Global Climate Summit in Copenhagen. And what better symbolizes the sustainable use of energy than a wind turbine? With its prominent position beside the A9 autobahn – a main traffic artery used by well over 150,000 motorists every day – the huge wind turbine in Fröttmaning at the gates of Munich was considered an ideal site from the very beginning. The wind turbine operator, Stadtwerke München (Munich City Utilities) agreed to support the project.
In the following months, the idea slowly became reality. At first, the focus was on the project’s technical feasibility. In the spring of 2009, a handful of experts in various disciplines such as wind energy, aerodynamics, lighting and adhesives got together to sketch out all aspects necessary for realizing the project. Answers had to be found for all key issues: How should the LEDs be arranged to have the least possible impact on the wind turbine’s aerodynamics? Which type of LED should be used? Which adhesives were most effective for securing the LEDs in every type of weather?
Late in the summer, the wind energy experts completed their computer simulation analyses on the effects of the installation on the rotor aerodynamics. At this point, tests were begun under real conditions: In wind tunnel tests at the Technical University Berlin, over 15 different configurations of lighting arrangements, LED models and cable routing were analyzed until optimal conditions were found. Tests showed that the LED installation had only a minimal effect on the wind turbine’s performance.
Yet even after the wind tunnel tests were completed late in the summer, all hurdles still hadn’t been taken. Approval from all relevant authorities had to be obtained. Siemens experts for traffic safety spoke with the autobahn authorities and air traffic officials; after all, the artistic installation shouldn’t pose a danger to motorists or air passengers. A lighting expertise confirmed that people living in the closer vicinity of the wind turbine wouldn’t be bothered by the installation lights. There would also be no increase in the wind turbine’s noise level.
It was louder only during the installation itself, which had to be completed in the record time of two weeks. More than 30 technicians worked on embedding 1.000 LED-Dots, consisting of 9,000 LEDs, in especially aerodynamic adapters so that the installation would have a minimal effect on the wind turbine’s performance. At the same time, the rotor blades were cleaned so the adapters would hold firm, even in difficult fall weather conditions like rain and snow, high humidity, and temperatures above and below freezing. The technicians laid more than 400 meters of cable through the hub of the turbine in order to energize the LEDs and generate various lighting motifs. Finally, the lighting animation software will be installed and after its completion it will shine over the countryside: A sign and symbol for a green future – the Siemens Superstar.

Siemens AG (Berlin and Munich) is a global powerhouse in electronics and electrical engineering, operating in the industry, energy and healthcare sectors. The company has around 410,000 employees (in continuing operations) working to develop and manufacture products, design and install complex systems and projects, and tailor a wide range of solutions for individual requirements. For over 160 years, Siemens has stood for technical achievements, innovation, quality, reliability and internationality. In fiscal 2008, Siemens had revenue of €77.3 billion and a net income of €5.9 billion (IFRS). Further information is available on the Internet at: www.siemens.com.
Read more
Reference Number: