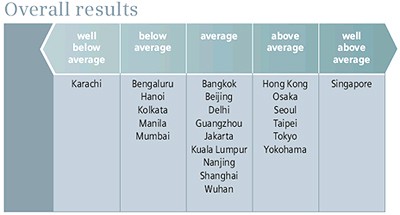 The Asian Green City Index examines the environmental performance of 22 major Asian cities in eight categories: energy and CO2, land use and buildings, transport, waste, water, sanitation, air quality and environmental governance. The EIU developed the methodology in cooperation with leading urban experts around the world, including representatives of the OECD, the World Bank and Asia’s regional network of local authorities, CITYNET. “The study of Asian cities shows one thing very clearly: higher income does not necessarily mean higher resource consumption. While resource consumption increases substantially up to an annual gross domestic product (GDP) of about €15,000 per capita, it drops again when income rises beyond this,” said Jan Friederich, research head of the EIU study. Why? In the prosperous Asian cities, environmental awareness is greater and infrastructures are more efficient. These cities are actively cutting their consumption of natural resources and are thus developing more sustainably. “In addition, cities that performed well in the Index are characterized by their ability to successfully implement environmental projects and consistently enforce regulations,” explained Friederich.
Also among the study’s particularly gratifying results were the following:
According to the study, the biggest challenges facing Asia’s cities are in the following areas:
The progressive rural exodus in Asia is unprecedented in human history. According to the United Nations Population Division, the proportion of Asia’s population living in cities has grown in the last 20 years by around a third to over 40 percent. In the last five years alone, the number of inhabitants in Asian cities has been increasing by about 100,000 a day. And this development will continue in the years to come. In China alone, experts predict that by 2025 there will be well over 200 cities with a population of over a million. 2011 there are just under 90, while Europe currently has 25 cities of that size.
The increasing urbanization is having an enormous impact on the infrastructure: with the additional number of inhabitants, correspondingly more energy, clean water, transportation and energy-efficient homes are required. The Asian Development Bank estimates that to cope with the influx, the Asian cities must for example build 20,000 new homes and 250 kilometers of road and provide transportation infrastructure and an extra six million liters of drinking water, all on a daily basis. In addition, the cities are the main emitters of harmful greenhouse gases: Cities are the growth engines of the future, but they are also responsible for 75 percent of worldwide energy consumption and for around 80 percent of the human CO2 emissions. “The battle against climate change will be decided in cities. This applies to Asia, with its booming conurbations, more than anywhere else on earth. But only green cities will make life worth living over the long term,” said Barbara Kux.
With its Environmental Portfolio, Siemens is the ideal partner for sustainable city development, which is based on energy and resource efficiency. The company has the largest and most comprehensive range of green technologies for the environmentally friendly development of infrastructure – from efficient and clean energy generation, transmission and use to public transport and water treatment systems. In fiscal 2010 alone, the company generated revenue of around €28 billion with its Environmental Portfolio. Some of this came from projects in Asian cities, involving for example the expansion and modernization of their railway networks, urban power supply systems and building automation.
The scope of the Green City Index is unique in the world. Asia is already the third region that has been analyzed for Siemens in this way by the EIU. The series began in 2009 with the European Green City Index, which identified Copenhagen (Denmark) as the greenest metropolis. In 2010 this was followed by the Latin American Green City Index, where Curitiba (Brazil) came out on top. Similar studies are planned for other parts of the world.
Overview of the overall Asian Green City Index results:
Further information and the detailed results of the study can be found here:
http://www.siemens.com/press/greencityindex.