German Lightning atlas for 2018: City of Schweinfurt No. 1 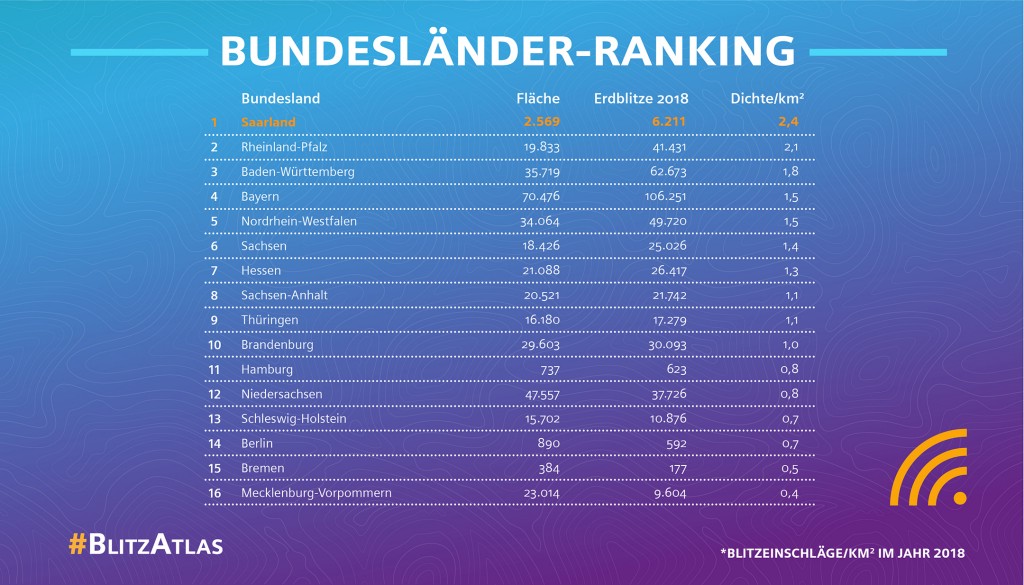 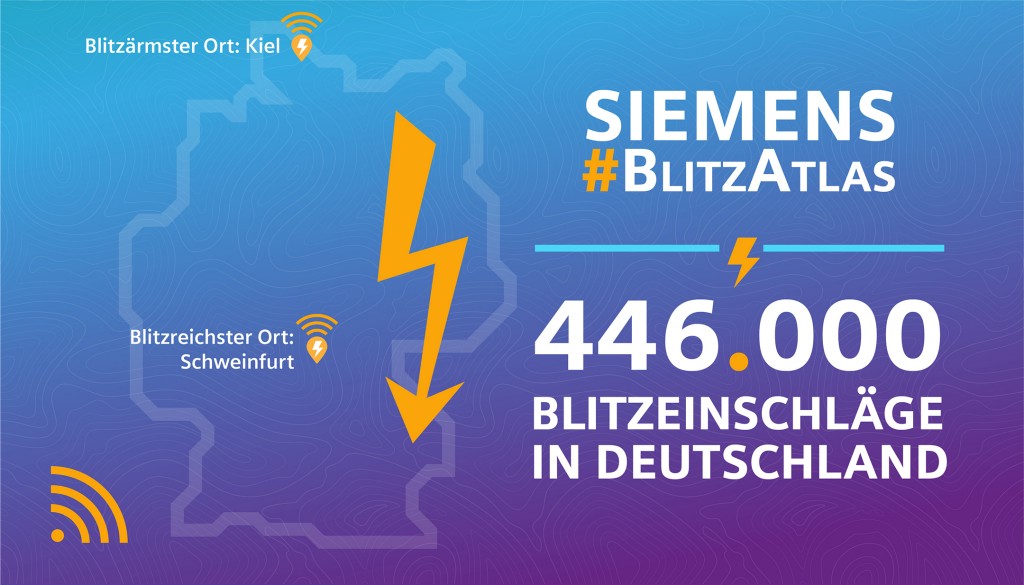 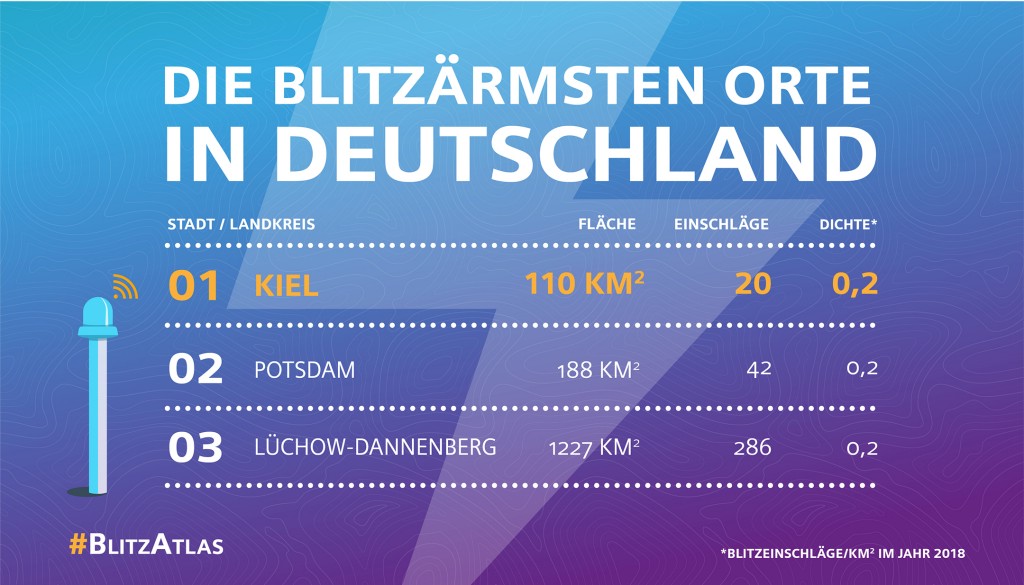 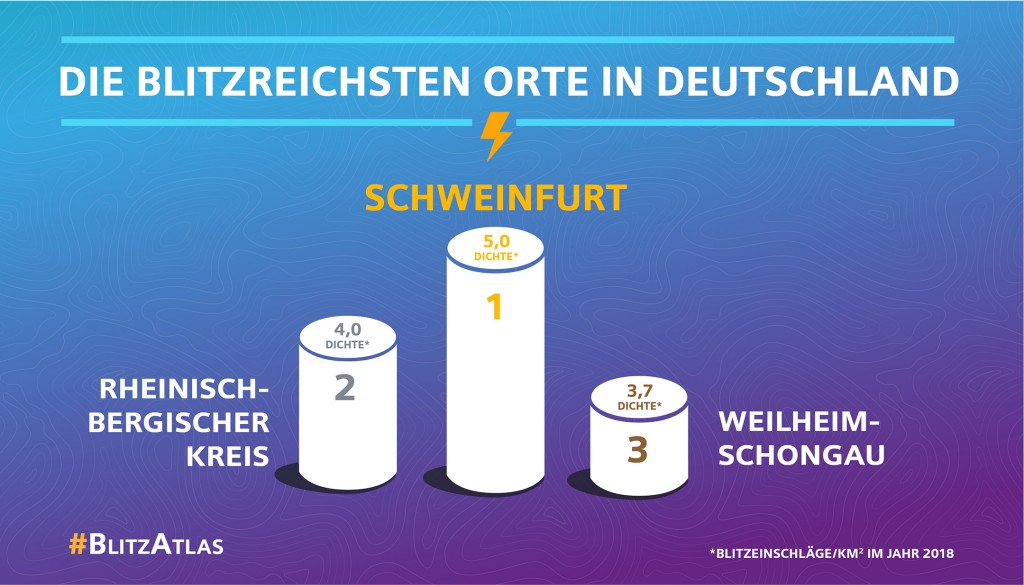 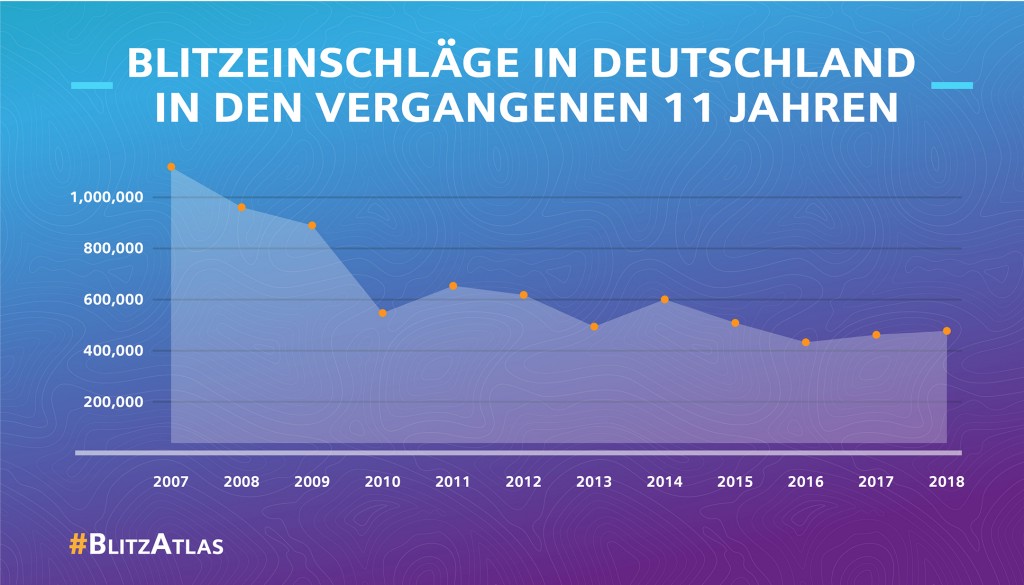 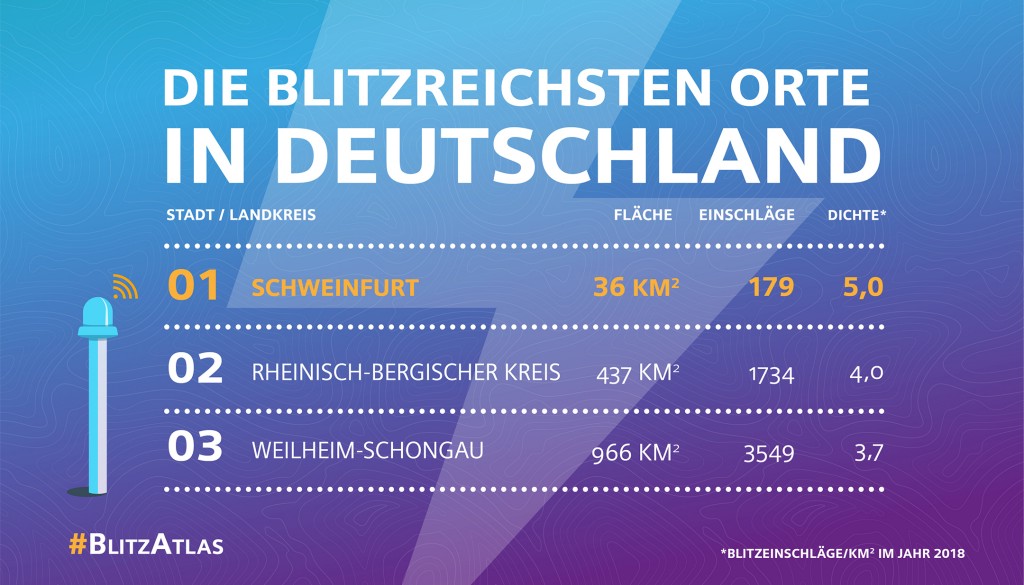 In Schweinfurt registrierte der Blitz-Informationsdienst von Siemens 5,0 Blitzeinschläge pro Quadratkilometer. An zweiter und dritter Stelle folgen der Landkreis Rheinisch-Bergischer Kreis in Nordrhein-Westfalen mit 4,0 Erdblitzen pro Quadratkilometer und der oberbayerische Landkreis Weilheim-Schongau mit 3,7.
The customers for Siemens’ lightning information service are weather services, insurance companies, industrial companies in all sectors and the operators of power grids and sports facilities. “BLIDS can provide evidence that a lightning strike was the cause of damage or downtime,” said Stephan Thern, head of Siemens’ lightning information service. Lightning causes a great deal of damage to electrical devices. The highly sensitive electronics used, for example, in televisions, satellite receivers, washing machines and industrial controls can be damaged even by far distant lightning activity. Information provided by BLIDS can reduce costs for consumers and end-customers because lightning strikes are usually covered by insurance policies. Due to advances in digitalization and the rapid rise in computational and storage capacities, BLIDS achieves data transfers that are increasingly faster and more precise. Transfers can now be completed less than ten seconds after a lightning strike.
“In 2018, we again detected a relatively low number of thunderstorms,” said Thern. “Last year’s summer of the century was too warm, the weather patterns were very stable, cold fronts were not as pronounced. Schweinfurt is again the leader, having topped the list four years ago as well. With a relatively small urban area, just a few thunderstorms were sufficient to produce a high concentration of lightning strikes. The second-place ranking of the Rheinisch-Bergisch and Weilheim-Schongau districts was due primarily to their high altitude and proximity to the mountains.”
In 2018, the main months for thunderstorm activity were May and June. The highest number of strikes on any one day – 34,785 – was recorded on June 1, 2018. Rhineland-Palatinate, North Rhein-Westphalia and Lower Saxony were the German states most affected, followed by Brandenburg. BLIDS detected the highest number of ground flashes in a single German state – more than 11,000 – in Bavaria on
May 31.
Siemens’ lightning information service uses around 160 connected measurement stations in Europe and supports the measurement network in Germany, Switzerland, the United Kingdom, the Benelux Union, the Czech Republic, Slovakia and Hungary. Due to the system’s precise measurement technology, its sensors can be set up without difficulty at intervals of 350 kilometers, significantly reducing the cost of installation, operation and maintenance. “With the latest software, we can detect – to an accuracy of 50 meters – where exactly lightning has just struck,” said Stephan Thern. “Since 1991, Siemens has been analyzing detected lightning strikes and immediately sending warning notices to our thunderstorm alarm customers – to protect people, technology and infrastructure.”
In 2018, an average of 1.3 lightning strikes were detected in Germany per square kilometer, a value that ranks the country in the middle of the pack compared to its neighbors. Measured lightning densities across Europe range from 0.04 in Ireland to 7.7 in Croatia. Since Slovakia recorded the highest lightning density in 2017, the 2018 results indicate that South East Europe remains the region with the most lightning activity on the continent. A variety of lightning service providers in individual countries contribute data to the European results. “The fact that we can make a homogenous, European measurement network available – although standards differ from one country to the next – is the result of outstanding cooperation and coordination among the different weather and measurement services throughout Europe,” said Stephan Thern. “As a result, we can offer customers and users measurement data of comparable quality.”
Private individuals and customers can use the BLIDS-Spion (“BLIDS Spy”) tool free of charge at www.blids.de to find out about lightning strikes. (The tool and website are available only in German.)

Siemens AG (Berlin and Munich) is a global technology powerhouse that has stood for engineering excellence, innovation, quality, reliability and internationality for more than 170 years. The company is active around the globe, focusing on the areas of electrification, automation and digitalization. One of the largest producers of energy-efficient, resource-saving technologies, Siemens is a leading supplier of efficient power generation and power transmission solutions and a pioneer in infrastructure solutions as well as automation, drive and software solutions for industry. With its publicly listed subsidiary Siemens Healthineers AG, the company is also a leading provider of medical imaging equipment – such as computed tomography and magnetic resonance imaging systems – and a leader in laboratory diagnostics as well as clinical IT. In fiscal 2018, which ended on September 30, 2018, Siemens generated revenue of €83.0 billion and net income of €6.1 billion. At the end of September 2018, the company had around 379,000 employees worldwide. Further information is available on the Internet at www.siemens.com .
Read more
Reference Number: