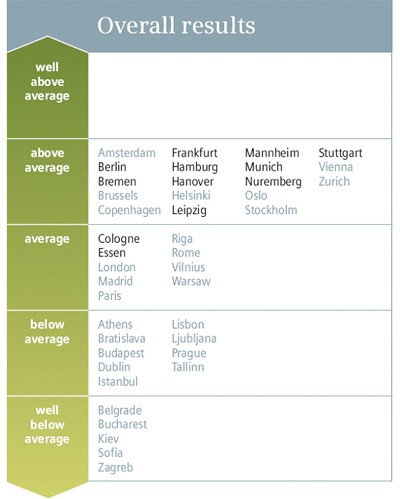 "The study provides local decision-makers with an objective basis for discussing environmental protection. As the world's leading provider of green technologies, we can – and will – help cities extend and improve their infrastructures in ways that are sustainable," says Rudolf Martin Siegers, head of Siemens Germany.
Today, three-quarters of all Germans live in cities – a proportion that is expected to increase another ten percent by 2050. Such growth is a tremendous challenge for urban infrastructures and environmental protection. In Germany, too, the fight against climate change will be decided in cities.
To gain insights into the environmental strategies and the successes and challenges in the twelve German cities analyzed, eight environmental areas – CO2, energy, buildings, transport, water, waste and land use, air quality and environmental governance – were evaluated both quantitatively and qualitatively. The methodology used in the Green City Index was developed by the EIU together with independent urban sustainability experts. The Index, which now covers more than 100 cities, is the only study of its kind in the world. Germany is the fourth region – after Europe, Latin America and Asia – for which Siemens has commissioned a Green City Index.
Key findings of the German Green City Index
Compared to the rest of Europe, German cities rank close together and are very similar in performance. This is partly due to legislation: the directing and implementing of sustainable urban development policies has a long history in Germany. In addition, Germans have a high degree of environmental awareness. "The study also shows that environmental protection is not a luxury," says Emily Jackson, project manager at the EIU. "Despite sometimes considerable differences among the cities in terms of income, population, geographical location and amount of industry – none of these factors have a measurable effect on a city’s ranking in the Index."
In the German cities analyzed, buildings use 20 percent less energy than those in neighboring European countries. This is the effect, among other things, of strict regulations for energy efficiency and of energy-saving building renovation.
The German cities also score somewhat better than their European counterparts in terms of energy efficiency. However, the European cities are significantly ahead in terms of the proportion of renewable energies used.
In transport, Germany pursues green transportation policies. But despite that fact, many Germans still rely on automobiles. Nearly 50 percent continue to travel to work by private car, although the networks of cycle paths and public transport are more extensive than in Europe.
In terms of water use, the German cities studied are at the top. At 59m per capita, annual consumption is about half that in other European metropolises (107m). Closely monitored water networks and a relatively high water price encourage the careful use of this valuable resource.
German cities are also at the top when it comes to recycling: despite generating a higher amount of waste than other European urban centers, German cities recycle about three times as much waste material.
In all the German regions assessed, air quality is promoted by quality targets and air quality policies. Even cities with relatively high levels of industry or traffic volumes perform well.
However, the greatest challenge facing German cities is CO2 emissions. Here, German cities are performing worse than their European counterparts, primarily due to the relatively high proportion of coal used in power generation.

Siemens AG (Berlin and Munich) is a global powerhouse in electronics and electrical engineering, operating in the industry, energy and healthcare sectors. For over 160 years, Siemens has stood for technological excellence, innovation, quality, reliability and internationality. The company is the world’s largest provider of environmental technologies. More than one-third of its total revenue stems from green products and solutions. In fiscal 2010, which ended on September 30, 2010, revenue from continuing operations (excluding Osram and Siemens IT Solutions and Services) totaled €69 billion and net income from continuing operations €4.3 billion. At the end of September 2010, Siemens had around 336,000 employees worldwide on the basis of continuing operations. Further information is available on the Internet at: http://www.siemens.com.
Read more
Reference Number: