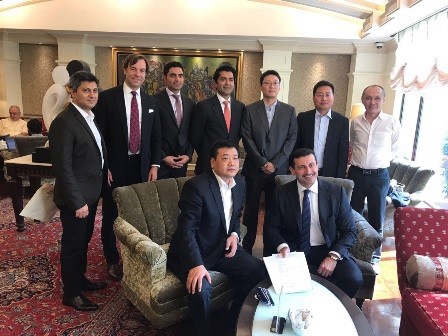 Siemens celebrated the win of its largest ever power generation contract in Pakistan, during a signing ceremony attended by high-ranking government officials. Under the contract, Siemens will supply a complete power island solution for a new power plant - Punjab Power Plant Jhang - that will be built in Jhang, located 250km south-west of Lahore. The deal is valued at around EUR200 million for Siemens and marks the first time Siemens’ highly-efficient H-Class gas turbines will be installed in Pakistan. Punjab Power Plant Jhang will increase power generation capacity in Pakistan by approximately 1.3 gigawatts and provide a much-needed boost to the national grid.
Attended by the Honorable Chief Minister of Punjab, Mian Muhammad Shehbaz Sharif, the ceremony saw the signing between China Machinery Engineering Corporation (CMEC) and government-owned Punjab Thermal Power (Pvt) Ltd (PTPL), an independent power producer. Siemens will supply the power island to CMEC, the project’s EPC contractor.
“We are very proud to have the chance to contribute with sustainable and reliable power generation for the future development of Punjab and for the Pakistani people.
Our highly-efficient technology will be instrumental to meeting their power needs within the timeframe targeted by the local government,” said Jean-Claude Nasr, Senior Executive Vice President of Siemens Power Generation Division, Middle East and North Africa.
Running on liquefied natural gas, the Punjab Power Plant Jhang will be built as a combined cycle power plant (CCPP). Siemens will supply a power island solution, comprising of two SGT5-8000H Gas Turbines, an SST-5000 Steam Turbine, two heat recovery steam generators, control systems and related auxiliaries. Siemens will also be responsible for engineering, project management and associated site services. The plant is scheduled to supply power to the grid in simple cycle operation by December 2018, and in combined cycle mode by November 2019.
Siemens’ SGT-8000H is the company’s largest and most advanced gas turbine in commercial operation. It is among the most efficient and powerful gas turbines in commercial operation, with low operating and lifecycle costs. Siemens sold more than 80 H-Class gas turbines worldwide, with 47 currently in commercial operation. The fleet of Siemens H-class gas turbines achieved about 500,000 fired hours.
"Siemens has been a key contributor to major infrastructure projects in the country, since opening its first office in 1922 in Lahore, present day Pakistan. We are eager to continue supporting its development towards sustainable power generation and building a more robust energy infrastructure that meets the growing needs of its population,” said Helmut von Struve, CEO of Siemens in Pakistan.
Siemens AG (Berlin and Munich) is a global powerhouse in electronics and electrical engineering, operating in the fields of industry, energy and healthcare as well as providing infrastructure solutions, primarily for cities and metropolitan areas. For over 165 years, Siemens has stood for technological excellence, innovation, quality, reliability and internationality. The company is one of the world's largest providers of environmental technologies. Around 43 percent of its total revenue stems from green products and solutions. In fiscal 2013, which ended on September 30, 2013, revenue from continuing operations totaled €75.9 billion and income from continuing operations €4.2 billion. At the end of September 2013, Siemens had around 362,000 employees worldwide on the basis of continuing operations. Further information is available on the Internet at: http://www.siemens.com