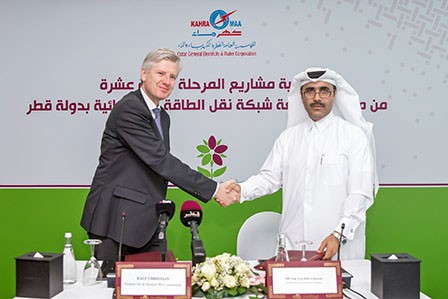 State-owned utility Qatar General Water & Electricity Corporation (KAHRAMAA) has awarded Siemens the largest contract to-date in Qatar for the expansion of the country’s power transmission network. As part of the deal, valued at EUR790 million (QAR3.1 billion), Siemens will deliver 35 turnkey super and primary substations for Phase 13 of the Qatar Power Transmission System Expansion project. This marks a significant milestone for Siemens, which has maintained involvement in every stage of the project since Phase 4. Completion is scheduled in two years’ time. Siemens will be responsible for the design, engineering, supply, installation, and commissioning of the substations for the 400-kilovolt (kV), 220-kV, 132-kV, 66-kV, and 11-kV voltage levels, including gas-insulated switchgear, transformers, and control and protection equipment.
“Since the upgrade program started in 2005, Siemens has installed more than 120 substations and approximately 1,500 kilometers of high-voltage cable”, stated Ralf Christian, CEO of Siemens Energy Management Division. “With this new order intake, our completed and under execution projects with KAHRAMAA total nearly 2.5 billion euros.”
As part of this contract, an existing ‘super substation’ – one that allows multiple voltage settings – in Doha will be upgraded with new 400kV/220kV gas-insulated switchgear and associated equipment, before connecting to the grid. Another substation will be used to meet rising demand for electricity in Al Jahhaniya and surrounding area, including temporary power feed to Rayyan Stadium, one of the venues for the upcoming world soccer championship. Substations will also feed power to steel, oil and gas and petrochemical facilities in Mesaieed industrial area, as well as Al Sadd area in Doha. Overall, the substations are required to supply power for ongoing infrastructure development projects, schools, hospitals, industries and residential complexes in and around Doha, Qatar’s capital city.
“We are delighted to build on a trusting relationship with KAHRAMAA, as we embark on yet another important phase to upgrade the power network. Siemens is committed to supplying reliable and innovative products to this highly ambitious project that will meet growing demand for electricity in a fast-developing country,” said Adrian Wood, CEO of Siemens in Qatar.
In addition to Phase XIII, Siemens also received a second order from KAHRAMAA to supply and install more than 2,170 medium-voltage switchgear boards. The 8DJH switchgear will be used as ring main units (RMU) in the 11 kV distribution network. RMUs protect, for example, transformers connected to the grid against overloads and short-circuits, ensuring a reliable power supply. The switchgear will be manufactured in Frankfurt, with the first units expected to go into operation by end-2017. The order is valued at roughly EUR27 million.
TextDemand for electricity in Qatar has been steadily rising over the past decade, thanks to its growing population and a government strategy that seeks to develop various sectors of the economy and reduce reliance on hydrocarbons. As a local company that has been operating in the Qatari market for more than four decades, Siemens has almost 500 employees in the country and contributes to transmitting and distributing more than 60 percent of the power generated there. Its partnership with KAHRAMAA dates back to 2000 when the utility was founded. Siemens is currently executing an order valued at 470 million euros to deliver 18 turnkey substations for KAHRAMAA’s Phase XII, which together with Phase XIII is part of its plans to expand its power transmission network. KAHRAMAA has closely aligned its strategy with the Qatar National Vision 2030. Phase XIII of the Qatar Power Transmission System Expansion project is due for completion by 2020, helping the country prepare for hosting the 2022 FIFA World Cup Qatar™.

Siemens AG (Berlin and Munich) is a global technology powerhouse that has stood for engineering excellence, innovation, quality, reliability and internationality for more than 165 years. The company is active in more than 200 countries, focusing on the areas of electrification, automation and digitalization. One of the world's largest producers of energy-efficient, resource-saving technologies, Siemens is a leading supplier of efficient power generation and power transmission solutions and a pioneer in infrastructure solutions as well as automation, drive and software solutions for industry. The company is also a leading provider of medical imaging equipment – such as computed tomography and magnetic resonance imaging systems – and a leader in laboratory diagnostics as well as clinical IT. In fiscal 2016, which ended on September 30, 2016, Siemens generated revenue of €79.6 billion and net income of €5.6 billion. At the end of September 2016, the company had around 351,000 employees worldwide.
Further information is available on the Internet at www.siemens.com.