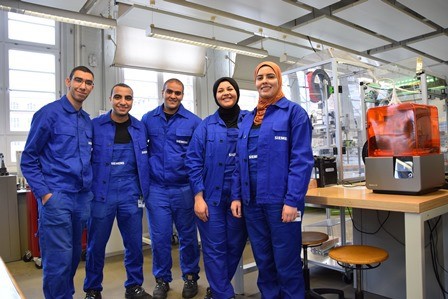 Continuing Siemens' extensive efforts to boost workforce development initiatives in Egypt, the company has selected four Egyptian students to start their work-study training at different Siemens locations across Germany. At the beginning of the new training year on August, 2017, the career-starters will begin their education journey in Berlin and return to Egypt upon graduation.
Based on the proven dual-system German education model, Siemens apprenticeships or two-track programs will run for 3.5 years. Once in Berlin, participants will be trained for careers in electronics for industrial engineering or in mechatronics engineering. The program combines theory with practice. Since the program is mostly conducted in German, the youth will also undergo an intensive German course to get them up to speed with the language.
“It is a core principle of Siemens to invest in the development and education of local
talent. Operating an efficient energy system, advanced industrial production facilities or modern urban infrastructures require a large, highly qualified local workforce,” said Emad Ghaly, CEO of Siemens Egypt. “The previous years of Siemens Apprenticeship Program in the country was a complete success – for the young people and for Siemens. That is why we're eager to continue the program,”
There were about 4,000 applicants in Egypt from several schools, colleges and faculties in this year’s Apprenticeship@Siemens program. Upon completion of the program, the young Egyptians will receive their diploma, according to German education standards, and get a chance to start a professional career at Siemens. During the training program, they are also sent to Siemens Egypt for two months, giving them a chance to make new contacts for their future careers.
“We are confident that these apprenticeships will help build the next generation of qualified local experts, while making a small contribution to the fight against youth unemployment.” Ghaly added.
Globally, the Apprenticeship@Siemens project, which was launched on August 1, 2012 in Berlin, has attracted great interest. Applicants come from all around the world, and in fiscal 2016, two trainees from Turkey and two from Egypt joined the project for the first time. After earning the qualification, the trainees – currently from more than 100 young people from 19 countries – will return to their home countries. The investment per apprentice is just under EGP 4 Million, for each student.
The Apprenticeship program is just one of several initiatives undertaken by Siemens to support the development of future highly skilled Egyptian workforce. Just recently, the company announced that it will join forces with the Deutsche Gesellschaft für Internationale Zusammenarbeit (GIZ) GmbH on behalf of BMZ, for the establishment and the operation of a joint training center as well as the strengthening of a selected Egyptian public vocational training institute.