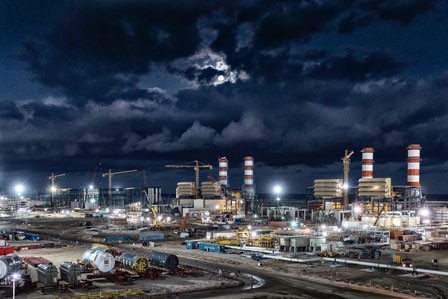 In June 2015, Siemens was awarded its single biggest order ever for the expansion of the Egyptian power supply. Now, only 18 months after the signing of the contract, Siemens has set a new worldwide benchmark for the execution of fast-track power projects. Together with its local partners Orascom Construction and Elsewedy Electric, the company has made great progress in its effort to boost Egypt’s power generation capacity by 45 percent, upon final completion of the three power plants. The first phase of the megaproject in Egypt has been finalized. The promised goal of bringing 4.4 gigawatts (GW) of new capacity to the grid has even been exceeded, and 4.8 gigawatts are already connected to the grid. The surplus capacity of 400 megawatts is sufficient to supply more than one million people in Egypt with electricity.
“We made a promise to Egypt and we kept our word. And by doing so, we not only overachieved in performance, we also broke all records in modern turnkey power plant construction. This was only possible by an outstanding collaboration between the Government, the Ministry of Electricity, the Egyptian Electricity Holding Company and a dedicated and competent Siemens team,” said Joe Kaeser, President and CEO of Siemens AG. “This underscores that Egypt and its people and any other nation or partner can count on Siemens to support mission-critical developments in their economy and society. Siemens is the best partner for such megaprojects, which can make a difference for entire nations,” Kaeser added.
H.E. Dr. Mohamed Shaker, the Egyptian Minister of Electricity and Renewable Energy, said: “The role of energy in economic development is undeniable. This is why we are committed to efficiently meeting Egypt’s growing energy demand through balancing supply and demand, optimizing the country’s natural resources like natural gas and renewable energy, as well as ensuring a competitive energy sector through technology and know-how transfer.” He added: “Siemens power projects will definitely make an important contribution to our power strategy. With a focus on building local talent and capacity, the company is also training 600 Egyptian engineers and technicians, who will contribute to Egypt’s future of energy. I believe these projects are a great example of how Egypt recognizes the importance of working with international long-term partners, like Siemens, to drive the country’s sustainable economic growth.”
After completion in May 2018, the three power stations will be the largest gas-fired, combined cycle power plants ever built and operated in the world. Emad Ghaly, CEO of Siemens Egypt, said: “This is a major achievement for our country and our people. I am proud that the Siemens team was selected to contribute to this success. The plants will supply enough electricity for 45 million people and enable Egypt to achieve $1.3 billion in fuel savings on an annual basis. With these projects, we provide an essential contribution to stabilize both the energy supply and the economy in our country, which has an outstanding importance for the whole Middle East region and Africa.”
Together with local Egyptian partners Elsewedy Electric and Orascom Construction, Siemens is supplying on a turnkey basis three natural gas-fired combined cycle power plants, each with a capacity of 4.8 GW, for a total combined capacity of 14.4 GW. The three power plants – Beni Suef, Burullus and New Capital – will be powered by 24 Siemens H-Class gas turbines, selected for their high output and efficiency. The scope of supply also comprises twelve steam turbines, 36 generators, 24 heat recovery steam generators and three 500 kV gas-insulated switchgear systems. The dimensions of the megaproject are enormous: More than 20,000 workers are engaged at the construction sites during implementation. Over 1.6 million tons of material are being handled.
This press release and a press picture / press pictures/ further material is available at: www.siemens.com/press/PR2017020148PGEN
For further information and press pictures on the record energy orders from Egypt, please see:www.siemens.com/press/energy-for-egypt
For further information on Division Power and Gas, please see: www.siemens.com/about/power-gas
For further information on SGT5-8000H gas turbine series, please see: www.energy.siemens.com/hq/en/fossil-power-generation/gas-turbines/sgt5-8000h.htm