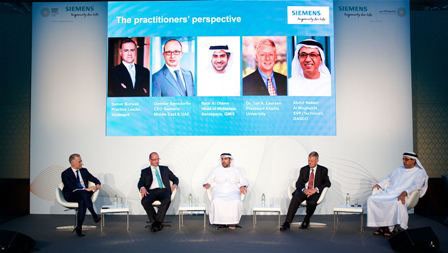 The Siemens Digitalization Roadshow in Abu Dhabi was opened by His Excellency Dr. Ahmad Belhoul, the UAE’s Minister of State for Higher Education, and attended by 125 leaders from the public, private and education sectors to address the challenges and opportunities presented by digitalization for Middle East businesses.
During a series of panel discussions the topics of education, partnerships, mindset change and the development of a business strategy for the digital era were highlighted as key drivers for the digital transformation in the region.
In his keynote speech His Excellency said: “As the UAE aspires to be one of the most innovative nations in the world, our leadership recognizes the key role technology plays in spurring economic growth and boosting our global competitiveness. Moreover, technology will help the UAE diversify our economy and foster new approaches to socio-economic challenges.”
“But we also acknowledge that rapid digitalization presents both challenges and opportunities for the UAE, namely that that the higher education sector must evolve to ensure that our graduates are ready for the jobs of the future. I am personally committed to creating an enabling environment for digitalization, starting with our universities and through close collaboration with private sector partners such as Siemens. By equipping our graduates with the right digital skills, we will unlock their potential to drive positive change in the UAE and around the world.”
One of the key themes emerging during the roadshow was the importance of a fresh mindset in building an ecosystem which encourages digitalization. The first panel discussion was chaired by Samer Bohsali, Practice Leader, Digital Business and Technology, Strategy& and included Badr Al Olama, Head of Mubadala Aerospace; Dietmar Siersdorfer, CEO, Siemens Middle East and UAE; Abdul Nasser Al Mughairbi, SVP (Technical) GASCO; and Tod A. Laursen, President, Khalifa University of Science, Technology and Research. The panelists discussed how organizations can embrace culture-change to drive the digital transformation, and also the importance of partnerships in developing successful projects.
“You need creative thinkers to develop new business models, and an open mindset to encourage employees to do things differently,” said Dietmar Siersdorfer, CEO, Siemens Middle East and UAE. “Not everything you try will be successful, so it’s important to be agile: fail fast but learn fast. We also have to look outside our own organizations, because partnerships and co-creation are key to a successful digital transformation.”
In addition to driving new business models, the Abu Dhabi roadshow also focused on the ability of digitalization to bring greater efficiency and productivity to existing businesses, with a focus on the energy and oil and gas sectors. Siemens presented its open, cloud-based IoT operating system MindSphere, which will be a key component of the company’s partnership with Expo 2020 Dubai, where it will be used for the optimization of energy and building management.
With its partners INSEAD, Atos, GMIS and Indish Technologies, the Siemens Digitalization Roadshow is building a roadmap for the Middle East to embrace digitalization as a tool for sustainability, competitiveness and prosperity. The Abu Dhabi roadshow was the second in a regional series which will make its next stop in Doha, Qatar before moving to Cairo, Egypt.