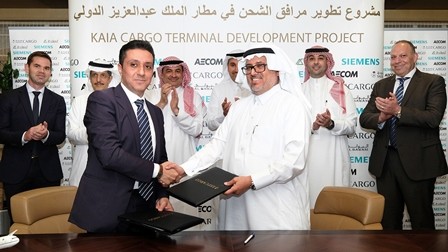 Siemens Postal, Parcel & Airport Logistics (SPPAL) has received an extensive order to expand and modernize a large airfreight center at King Abdulaziz International Airport in Jeddah (Saudi Arabia). The terminal belongs to Saudi Airlines Cargo Company (SACC), the country’s leading cargo airline. Jeddah is Saudi Arabia's most important port city on the Red Sea. Siemens is equipping the terminal with state-of-the-art cargo logistics and intelligent software for a considerable increase in capacity. The contract also covers long-term maintenance of the systems. Through the project, Siemens is supporting the customer’s growth plans and promoting economic development in Saudi Arabia and the entire Middle East. SACC is a subsidiary of the airline Saudia and transports cargo to over 250 destinations in Asia, Africa, Europe and the United Sates.
"Our decades of experience and our know-how in air cargo logistics enable SACC to maintain minimum ground handling times," says Michael Reichle, CEO of Siemens Postal, Parcel & Airport Logistics. "As a result, we support the airline’s efforts to further increase its competitiveness."
"The 75,000-square-meter cargo handling facility has double area of the current one, estimated at 35,000 square meters. The first phase of the project commences June 2018 and is expected to end November 2019 while the second phase begins June 2020 and ends December 2021 as per the implementation plan," explains Omar Hariri, CEO, Saudia Cargo.
In Jeddah, Siemens is expanding the cargo capacity at King Abdulaziz International Airport (KAIA) in two phases to arrive at a final volume of 820,000 tons per year. Siemens is implementing a fully automated storage system with 700 positions for unit load devices (ULDs) and six elevating transfer vehicles (ETVs). Thirty-three conveyor lines form the interface to the airside. In addition, the facility has around 50 build-up and break-down workstations for containers of various sizes.
Furthermore, Siemens is setting up a large air-conditioned area with over 170 storage positions for perishable goods in dedicated refrigerated and deep-freeze rooms. The intelligent Siemens software Cargo Compact is responsible for control of the entire warehouse system. SPPAL with its local presence in the Middle East is the ideal partner for the project. The regional SPPAL company SD (Middle East) with around 800 employees has been in Dubai for years.
Among Siemens' customers are six of the world's top ten cargo airports, which together handle around 19 million tons of goods annually. The company's track record also includes long-term operating and maintenance contracts with almost 40 airports worldwide.
Siemens Postal, Parcel & Airport Logistics GmbH (SPPAL) headquartered in Constance, Germany, is a fully owned subsidiary of Siemens AG. SPPAL is a leading provider of innovative products and solutions in mail and parcel logistics and automation as well as in airport logistics with baggage and cargo handling. Software solutions and customer services along the whole product life cycle complete the portfolio. The company has an installed base in more than 60 countries worldwide. Major customers include renowned airports as well as postal and parcel service providers around the globe. Further information is available on the Internet at www.siemens.com/logistics
Siemens AG (Berlin and Munich) is a global technology powerhouse that has stood for engineering excellence, innovation, quality, reliability and internationality for 170 years. The company is active around the globe, focusing on the areas of electrification, automation and digitalization. One of the world’s largest producers of energy-efficient, resource-saving technologies, Siemens is a leading supplier of efficient power generation and power transmission solutions and a pioneer in infrastructure solutions as well as automation, drive and software solutions for industry. The company is also a leading provider of medical imaging equipment – such as computed tomography and magnetic resonance imaging systems – and a leader in laboratory diagnostics as well as clinical IT. In fiscal 2017, which ended on September 30, 2017, Siemens generated revenue of €83.0 billion and net income of €6.2 billion. At the end of September 2017, the company had around 377,000 employees worldwide. Further information is available on the Internet at www.siemens.com.