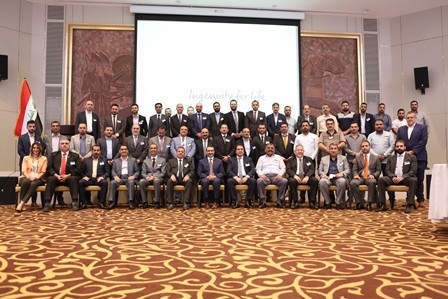 Energy Day Iraq: A Roadmap of the Future’, a one-day event held by Siemens in Baghdad today, presented the company’s comprehensive portfolio of Power Generation, Energy Management and financing solutions to support the repowering of the New Iraq. More than 100 people attended the event and heard a number of Siemens executives discuss various power generation, service and digitalization solutions, the potential for renewable energy implementation in Iraq and fuel treatment solutions.
The event builds on a recent visit by Joe Kaeser, President and CEO of Siemens AG, to Baghdad where he met with Prime Minister of Iraq, Haider Al-Abadi. During the meeting they discussed the company’s strategic roadmap for repowering Iraq, a series of short, medium and long-term plans designed to meet the reconstruction goals of the country and support its economic development. Under the “Roadmap for the Electrification of the New Iraq”, Siemens is ready to add 11 gigawatts (GW) of power generation capacity over four years to ensure 23 million Iraqis across the country have reliable and sustainable electricity 24/7. This would boost current generation capacity by almost 50 percent. The economic viability of the plan is secured by billions of US dollars in potential fuel savings and revenue generation for the electricity sector, supporting the development of the future Iraq.
“Powering Iraq is a top priority for Siemens and we are committed to this goal. During the Energy Day Iraq, we hosted government officials, partners and customers and discussed how we envision the implementation of the Iraq Roadmap and the benefits it would bring. We expect it to create tens of thousands of jobs, support training and education programs as well as compliance and financing measures. Our aim is not only to bring power but to advance sustainable economic development and enhance the quality of life for the people of Iraq,” said Jean-Claude Nasr, Senior Executive Vice President, Power Generation at Siemens in the Middle East and North Africa.
At the event, Siemens experts presented technology for highly-efficient power generation including large gas turbines and the A45 Fast Track Solution for quick power. They also outlined ways to reduce energy losses, introduce smart grids, strengthen the transmission grid and modernize existing power plants.
Modernizing the country’s energy infrastructure is intended to be completed in stages, from immediate improvement for up to 300,000 people, which can be operational within three months, to medium and long-term projects that require between 10 and 24 months’ completion time and beyond. Siemens also discussed ways of assisting Iraq’s government in securing appropriate finance packages provided by international commercial banks, Export Credit Agencies and supported by the German Government.