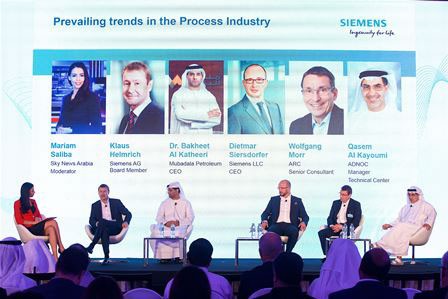 Siemens has brought together more than 200 industry leaders to discuss the role of digital technologies in building a globally competitive manufacturing sector in the Middle East. Officials and executives from the government and private sectors attended the SPACe (Siemens Process Automation Community) event, with keynote speakers including Klaus Helmrich, Member of the Managing Board of Siemens AG, Dr. Bakheet Al Katheeri, CEO, Mubadala Petroleum and Qasem Al Kayoumi, Technical Center Manager, ADNOC.
“The industrial world faces a common set of challenges, including boosting productivity, efficiency and ensuring maximum protection against cyber security threats,” said Klaus Helmrich, Member of the Managing Board of Siemens AG. “External factors can put pressure on an entire industry, bringing OPEX and lifecycle costs into sharper focus. Digitalization is the answer to this. The Middle East has the potential to leapfrog the third industrial revolution to become a world player in Industrie 4.0, and Siemens is driving this transformation.”
Held in Abu Dhabi on September 27 and 28, SPACe is a platform for companies to take an active part in shaping the region’s industrial sector through information and best-practice sharing, networking, technology deep-dives, expert insight and hands-on experience with the latest Siemens technology.
“Industry is a key driver of economic diversity, growth, job creation and stability in the Middle East, but companies which do not embrace Industrie 4.0 and digitalize their processes will not be able to remain competitive,” said Uwe Troeger, Senior Executive Vice President, Process Industries and Drives and Digital Factory, Siemens Middle East. “The region’s mix of industrial capability has enormous potential. Regardless of whether we’re talking about refining petrochemicals, making medicine or 3D printing aircraft parts, digitalization is the key to being fast, efficient, reliable and competitive in an increasingly globalized marketplace.”
As part of the community event, Siemens bolstered its industrial digitalization portfolio by launching the newest version of the company’s Simatic PCS 7 process control system. The latter controls and monitors continuous manufacturing processes such as those in chemical plants, the water and wastewater sector and the pharmaceuticals industry. It allows manufacturers to respond quickly to changes in market requirements, ensures continuous operation and allows greater visibility over a process. The new version supports the world-leading Industrial Ethernet standard Profinet with two new distributed I/O lines for end-to-end digitalization down to the field level, giving plant operators greater flexibility, future-proofing and creating a building block to the Digital Enterprise.
Simatic PCS 7 is installed in various manufacturing applications across the Middle East, including at Julphar, the region’s largest pharmaceuticals manufacturer, where it enables the local production of up to 40 million vials of affordable insulin per year.

Siemens AG (Berlin and Munich) is a global technology powerhouse that has stood for engineering excellence, innovation, quality, reliability and internationality for more than 165 years. The company is active in more than200 countries, focusing on the areas of electrification, automation and digitalization. One of the world’s largest producers of energy-efficient, resource-saving technologies, Siemens is No. 1 in offshore wind turbine construction, a leading supplier of gas and steam turbines for power generation, a major provider of power transmission solutions and a pioneer in infrastructure solutions as well as automation, drive and software solutions for industry. The company is also a leading provider of medical imaging equipment – such as computed tomography and magnetic resonance imaging systems – and a leader in laboratory diagnostics as well as clinical IT. In fiscal 2015, which ended on September 30, 2015, Siemens generated revenue of €75.6 billion and net income of €7.4 billion. At the end of September 2015, the company had around 348,000 employees worldwide. Further information is available on the Internet at www.siemens.com.