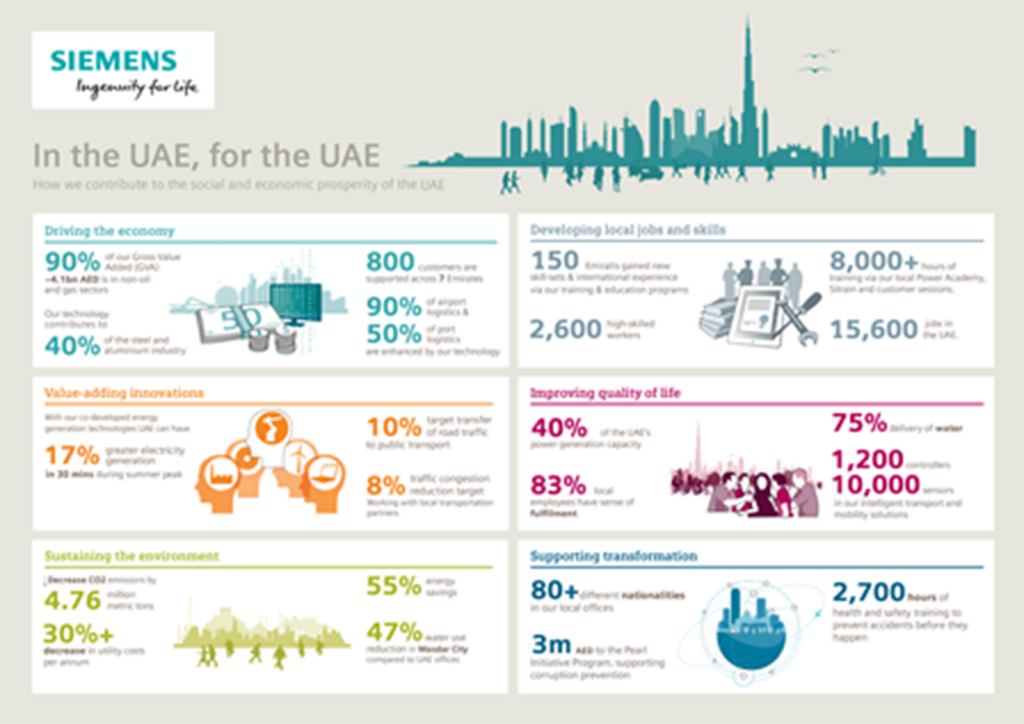 After almost four decades of operating in the UAE, Siemens has quantified its contribution to society through its operations in a report titled ‘In the UAE, for the UAE – Making real what matters’. The findings illustrate the company’s commitment to the country in line with the UAE’s vision for a diversified, sustainable future.
Through its operations across different sectors, Siemens contributed AED 4.5 billion in direct and indirect gross value added to the economy during fiscal 2015. Out of that, 90 percent was in non-oil sectors, reflecting its support for the country’s strategy of economic diversification away from hydrocarbons. When it comes to job creation, Siemens directly employs 2,600 highly-skilled workers of more than 80 nationalities and enables 15,600 jobs in the UAE. In infrastructure, Siemens’ technology provides 40 percent of the UAE’s power generation capacity, supplying electricity to 3.6 million residents. It further enables the delivery of 75 percent of the country’s daily water supply.
Digitalization is one of the company’s key pillars, alongside electrification and automation, and is implemented across its portfolio. The company uses innovative digital technology to merge the physical and virtual worlds, harnessing data to create value for customers. For example, Siemens’ customers use over 2 million data points and 600,000 field devices to collect around 1 Terabyte of data annually and analyze it to create energy-efficient, safe and secure buildings and infrastructure for the population.

“As the UAE approaches its 50th anniversary, we recognized that only by carefully considering what is important to the government and the people of the UAE could we really evaluate our success as a company,” said Dietmar Siersdorfer, CEO of Siemens in the Middle East and UAE. “By bringing energy efficient, resource-saving technology to all our projects, our contribution to the UAE’s dynamic and visionary journey continues.”
To ensure sustainable development while preserving the environment and to strike a balance between economic and social development, the Gulf Arab nation has outlined its plans for the future in the UAE Vision 2021 National Agenda. It focuses on improving air quality, preserving scarce water resources, boosting the contribution of clean energy and executing green growth plans.
In this vein, Siemens’ energy efficient combined-cycle power plants have contributed to the abatement of CO2 emissions by 4.76 million metric tons in the company’s financial year 2015. The company’s Middle East headquarters at Masdar City in Abu Dhabi is a regional benchmark in energy efficient infrastructure, with an average of 55 percent energy savings and 47 percent water use reduction, compared to standard office buildings in the country. The country recently announced the UAE Energy Plan for 2050, which outlines an investment of AED 600 billion to meet its energy requirements sustainably by balancing energy production and consumption. Its future energy mix will include clean coal, gas, nuclear, solar and wind power, and biofuels. With its smart building technology, Siemens estimates there is potential to save 40 percent of the energy used for cooling in the UAE during peak summer months.
Additionally, Siemens’ technology enables 50 percent of port logistics and 90 percent of airport logistics across the country, thanks to effective baggage and cargo handling solutions. They also facilitate the operations of 40 percent of the aluminum and steel industries in the UAE, home to one of the world’s largest aluminum smelters.
The UAE has declared 2017 as the Year of Giving. As part of giving back to society, contributing to knowledge transfer and developing local skills, Siemens provided education and training programs to 150 young Emiratis during fiscal 2015. This effort supports the country’s ambitions for developing a diversified and flexible knowledge-based economy powered by skilled Emiratis and strengthened by world-class talent.
The full report can be found at www.siemens.ae

Siemens AG (Berlin and Munich) is a global technology powerhouse that has stood for engineering excellence, innovation, quality, reliability and internationality for more than 165 years. The company is active in more than 200 countries, focusing on the areas of electrification, automation and digitalization. One of the world's largest producers of energy-efficient, resource-saving technologies, Siemens is a leading supplier of efficient power generation and power transmission solutions and a pioneer in infrastructure solutions as well as automation, drive and software solutions for industry. The company is also a leading provider of medical imaging equipment – such as computed tomography and magnetic resonance imaging systems – and a leader in laboratory diagnostics as well as clinical IT. In fiscal 2016, which ended on September 30, 2016, Siemens generated revenue of €79.6 billion and net income of €5.6 billion. At the end of September 2016, the company had around 351,000 employees worldwide. Further information is available on the Internet at www.siemens.com.