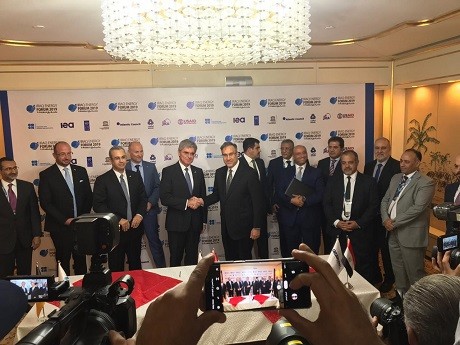 Siemens and Orascom Construction signed an agreement with Iraq’s Ministry of Electricity to rebuild Baiji 1 and Baiji 2 power plants in northern Iraq. The plants will have a combined generation capacity of 1.6 gigawatts when completed and are a major step in Siemens roadmap for rebuilding Iraq's power sector that has already added more than 700 megawatts to Iraq’s grid.
Work at Baiji, which is about 250 km north of Baghdad, will begin once the contracts are approved by Iraq’s Council of Ministers and a financial agreement is reached with the Ministry of Finance. The projects are expected to be completed within 28 months after the financial closing.
The power plants in Baiji were severely damaged by Islamic State militants. Recovering the lost capacity from the plants will help Iraq power its biggest oil refinery located in the city, a concrete plant and will provide electricity to thousands of homes in Salahuddin province and other areas.
Iraq’s Electricity Minister Luay al-Khateeb, Siemens AG’s Joe Kaeser and Osama Bishai, the CEO of Orascom Construction, witnessed the signing of the agreement on the sidelines of the Iraq Energy Forum 2019 in Baghdad.
Siemens will supply four new SGT5-2000E gas turbines and will inspect and revamp six exiting ones. The company will also provide two 400kV and one 132kV substations, along with generators, auxiliaries, automation and control systems, and related electrical equipment.
“Iraq’s economic transformation is picking up pace, and this project demonstrates Siemens commitment to help Iraq’s Ministry of Electricity provide efficient and reliable power to all its people,” said Dietmar Siersdorfer, CEO, Siemens Middle East and UAE. “We are proud to begin this project to help Iraqis in liberated areas recover and prosper.”
Discussing the deal, Karim Amin, CEO of Power Generation at Siemens AG, said: “The reconstruction of Baiji 1 and 2 power plants mark the second phase of our roadmap in Iraq and will be the biggest so far in terms of power generating capacity when both plants are completed. The rebuilding of Baiji will secure 1.6 GW and will create hundreds of jobs, which is a further demonstration of Siemens’ commitment to support knowledge transfer to the Iraqi people.”

Siemens footprint has been expanding in Iraq, and the company is now active in over 20 sites, from Basra to Erbil. Siemens also has some recent experience in Baiji. Earlier this month, Siemens delivered power equipment to ensure constant electricity for a clinic that’s being built in the city and will also donate Siemens medical equipment for the facility. Al-Tawheed Center is expected to open this year and will be able to treat 10,000 patients a year.
Siemens and Iraq’s Ministry of Electricity signed an implementation agreement to kick off the execution of the roadmap for rebuilding Iraq's power sector in April 2019. Within the implementation agreement, the two agreed on the award of contracts valued at approximately 700 million euros for Phase 1 of the Roadmap.

Siemens Gas and Power (GP) is a global pacesetter in energy, helping customers to meet the evolving demands of today’s industries and societies. GP comprises broad competencies across the entire energy value chain and offers a uniquely comprehensive portfolio for utilities, independent power producers, transmission system operators and the oil and gas industry. Products, solutions and services address the extraction, processing and the transport of oil and gas as well as power generation in central and distributed thermal power plants and power transmission in grids. With global headquarters in Houston in the U.S. and more than 64,000 employees in over 80 countries, Siemens Gas and Power has a presence across the globe and is a leading innovator for the energy systems of today and tomorrow, as it has been for more than 150 years.
Siemens AG (Berlin and Munich) is a global technology powerhouse that has stood for engineering excellence, innovation, quality, reliability and internationality for more than 170 years. The company is active around the globe, focusing on the areas of power generation and distribution, intelligent infrastructure for buildings and distributed energy systems, and automation and digitalization in the process and manufacturing industries. Through the separately managed company Siemens Mobility, a leading supplier of smart mobility solutions for rail and road transport, Siemens is shaping the world market for passenger and freight services. Due to its majority stakes in the publicly listed companies Siemens Healthineers AG and Siemens Gamesa Renewable Energy, Siemens is also a world-leading supplier of medical technology and digital healthcare services as well as environmentally friendly solutions for onshore and offshore wind power generation. In fiscal 2018, which ended on September 30, 2018, Siemens generated revenue of €83.0 billion and net income of €6.1 billion. At the end of September 2018, the company had around 379,000 employees worldwide. Further information is available on the Internet at www.siemens.com.