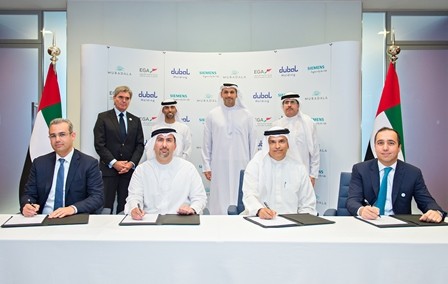 United Arab Emirates: Emirates Global Aluminium (EGA), Mubadala and Dubal Holding are to sign an agreement to develop a state-of-the-art power block and a water desalination plant at EGA’s smelter at Jebel Ali in Dubai.
The new facilities will improve the efficiency of power for EGA’s aluminium smelting, reducing environmental emissions and natural gas consumption.
Mubadala and Dubal Holding are to establish a joint venture to develop the new facilities. EGA intends to buy the facility’s output for 25 years following commissioning.
EGA is the largest industrial company in the UAE outside oil and gas, and is jointly owned by Mubadala and Dubal Holding.
The joint venture will install a combined cycle power facility at EGA’s Jebel Ali site capable of generating over 600 megawatts of electricity.
The shareholders of the joint venture have signed an agreement with Siemens to install the UAE’s first combined cycle H-class gas turbine, a leading technology in efficient power generation.
A signing ceremony for the project was witnessed by His Excellency Eng. Suhail Mohamed Faraj Al Mazrouei, UAE Minister of Energy and Industry, Khaldoon Khalifa Al Mubarak, Chief Executive Officer and Managing Director of Mubadala Investment Company and Chairman of EGA, His Excellency Saeed Mohammed Al Tayer, Vice Chairman, Dubal Holding and Vice Chairman of EGA, and Joe Kaeser, President and Chief Executive Officer of Siemens AG.
His Excellency Saeed Mohammed Al Tayer, Vice Chairman of Dubal Holding and Vice Chairman of EGA, said: “This project is in line with the directives of the wise leadership of His Highness Sheikh Khalifa bin Zayed Al Nahyan, President of the UAE; His Highness Sheikh Mohammed bin Rashid Al Maktoum, Vice President and Prime Minister of the UAE and Ruler of Dubai, and His Highness Sheikh Mohamed bin Zayed Al Nahyan, Crown Prince of Abu Dhabi and Deputy Supreme Commander of the UAE Armed Forces to enhance sustainable development in the UAE. This is done through ambitious initiatives and sustainable development projects that are highly efficient according to the IPP model. Our project includes a combined cycle power facility and a reverse osmosis water desalination plant that support the objectives of the UAE Vision 2021 and the UAE Centennial 2071, which outlines the path for a brighter future for generations to come by making the UAE the best country in the world. We look forward to further achievements with this project.”
Khaled Al Qubaisi, CEO Aerospace, Renewables and ICT, Mubadala, said: “This project creates an attractive opportunity for Mubadala to add to its portfolio of investments in power generation and utilities in the United Arab Emirates and internationally. For EGA, structuring this project on the Independent Power Producer model provides certainty on power prices for decades ahead whilst preserving capital for other opportunities.”
Abdulnasser Bin Kalban, Chief Executive Officer of Dubal Holding, said: “In addition to our broader industrial mandate, Dubal Holding is also developing businesses in power generation, making this project at EGA attractive for us as an investment opportunity. This builds on our investment partnership with Mubadala, following the successful establishment of EGA itself. This project is expected to improve the overall power efficiency at Jebel Ali smelter and I look forward to further improvements in the near future”
Abdulla Kalban, Managing Director and Chief Executive Officer of EGA, said: “This deal will enable EGA to further improve energy efficiency, saving natural resources and reducing the costs and environmental emissions associated with our aluminium production. Bringing in our shareholders to invest in such power facilities through a new company makes sense for EGA from a capital allocation perspective as we expand our core business upstream and internationally.”
Karim Amin, CEO Sales, Siemens Power Generation, said: “This project is a breakthrough on many levels; the first Siemens H-class globally to power an aluminium smelter, the most efficient power plant in the UAE and the most efficient in EGA’s fleet. This proven technology will be a boost to the UAE’s industrial sector, and we look forward to working hand-in-hand with the EGA, Mubadala and Dubal Holding team to bring this project to fruition.”
Once the project is complete, five older, smaller and less efficient turbines at EGA Jebel Ali will be put on standby for use only in emergencies.
The new, more efficient power facility is expected to reduce greenhouse gas emissions from EGA’s power generation at Jebel Ali by some 10 per cent. Emissions reductions per tonne of aluminium produced at Jebel Ali, which includes both power generation and aluminium smelting, are expected to be up to seven per cent.
EGA’s total CO2 equivalent emissions, from all its operations in the UAE, were 8.1 tonnes per tonne of aluminium produced in 2017 and are currently below eight tonnes per tonne of aluminium produced. The estimated average greenhouse gas emissions per tonne of aluminium produced globally is 12.7 tonnes CO2 equivalent.
In addition, EGA’s NOx emissions at Jebel Ali are expected to reduce by 58 per cent. NOx, which is also emitted by motor vehicles, is amongst a group of emissions targeted for reductions under ‘UAE Vision 2021’ to improve local air quality.
EGA requires electricity for aluminium smelting and other industrial operations. EGA runs captive power plants at its sites in Jebel Ali and Al Taweelah with a current combined generating capacity of 5,450 megawatts, making the company the largest power producer in the UAE after DEWA and ADWEA. EGA’s power fleet is already amongst the most efficient fleet in the Middle East.

Siemens AG (Berlin and Munich) is a global technology powerhouse that has stood for engineering excellence, innovation, quality, reliability and internationality for more than 170 years. The company is active around the globe, focusing on the areas of electrification, automation and digitalization. One of the largest producers of energy-efficient, resource-saving technologies, Siemens is a leading supplier of efficient power generation and power transmission solutions and a pioneer in infrastructure solutions as well as automation, drive and software solutions for industry. With its publicly listed subsidiary Siemens Healthineers AG, the company is also a leading provider of medical imaging equipment – such as computed tomography and magnetic resonance imaging systems – and a leader in laboratory diagnostics as well as clinical IT. In fiscal 2018, which ended on September 30, 2018, Siemens generated revenue of €83.0 billion and net income of €6.1 billion. At the end of September 2018, the company had around 379,000 employees worldwide. Further information is available on the Internet at www.siemens.com