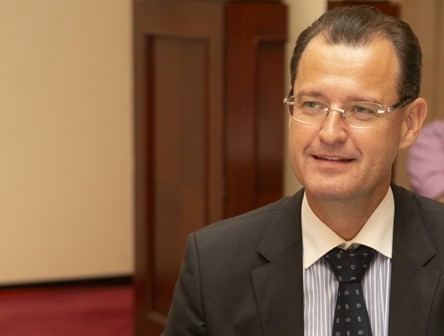 Siemens has appointed Markus Strohmeier (47) as Senior Executive Vice President of the company’s Building Technologies division in the Middle East, effective January 1, 2018. Based in Dubai, UAE, Strohmeier will be instrumental in supporting customers in the region to build increasingly digitalized infrastructure for smarter, safer and more energy efficient buildings.
Since 2009 Strohmeier has been CEO of Siemens LLC in the Sultanate of Oman, responsible for developing some of the company’s most significant projects in the country. This includes delivering key components to the country’s newest petrochemical projects, and handing over the three most efficient combined-cycle power plants, Sohar 2, Barka 3 and SUR, additionally secured with long-term service contracts. Strohmeier also oversaw significant contracts for security systems and more than 100 landmarks controlled by Siemens Building Technology.
Commenting on his appointment, Strohmeier said: “There is growing emphasis on energy efficiency, security, safety and the digitalization of our buildings. Intelligent infrastructure is an enabler of social and economic development. As the Middle East continues to build increasingly smart cities, Siemens has an excellent portfolio and track record of applying smart building technologies to some of the region’s most prominent landmarks. I am excited to work with our local team and partners to grow this important business.”
Strohmeier began his career with Siemens in Germany in 1990 for Public Communication Networks, and his assignments have led him to Libya, Indonesia, Saudi Arabia and China. He went on to head the Mobility and Energy Management Divisions in Siemens Indonesia, in addition to his role as Board Member of the same organization. During his tenure as CEO of Siemens LLC in the Sultanate of Oman, he was directly heading the Divisions Power and Gas, Building Technologies, Digital Factory and Process Industries and Drives. Strohmeier is an Electrical Engineer and graduated from Höhere Technische Bundeslehranstalt in Klagenfurt Austria.
Buildings consume around 41 percent of global energy consumption, and 70 percent of the world’s population is expected to be living in cities by 2050. With people spending 90 percent of their lives in buildings Siemens uses technology to support its customers in creating ‘perfect places,’ developing intelligent, efficient, increasingly digitalized infrastructure.
Siemens is a pioneer in digitalized buildings in the Middle East, having implemented smart building technology in key landmarks including Abu Dhabi’s Sheikh Zayed Grand Mosque, Dubai’s Atlantis Hotel and 3D-printed Office of the Future, and the Dubai Opera.

Siemens AG (Berlin and Munich) is a global technology powerhouse that has stood for engineering excellence, innovation, quality, reliability and internationality for more than 165 years. The company is active in more than200 countries, focusing on the areas of electrification, automation and digitalization. One of the world’s largest producers of energy-efficient, resource-saving technologies, Siemens is No. 1 in offshore wind turbine construction, a leading supplier of gas and steam turbines for power generation, a major provider of power transmission solutions and a pioneer in infrastructure solutions as well as automation, drive and software solutions for industry. The company is also a leading provider of medical imaging equipment – such as computed tomography and magnetic resonance imaging systems – and a leader in laboratory diagnostics as well as clinical IT. In fiscal 2015, which ended on September 30, 2015, Siemens generated revenue of €75.6 billion and net income of €7.4 billion. At the end of September 2015, the company had around 348,000 employees worldwide. Further information is available on the Internet at www.siemens.com.