Siemens wins international recognition for its motors manufactured in India 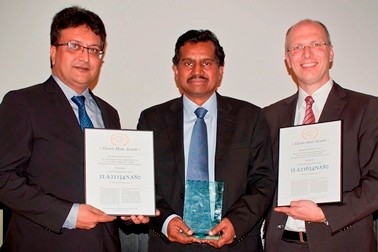 
Siemens India won the Super-Efficient Equipment Appliance Deployment (SEAD) Global Efficiency Medal for its 1LA2 series of Low Voltage IE3 induction motors, verified by testing of 3.7kW and 11kW models. The Super-efficient Equipment and Appliance Deployment (SEAD) initiative is an international collaboration of 16 countries and an initiative under the Clean Energy Ministerial, a global forum to share best practices and promote policies and programs that encourage and facilitate the transition to a clean energy economy across the world.
The Swedish Ministry of Enterprise, Energy and Communications hosted the awards ceremony
in Zurich, Switzerland. International dignitaries, including the Ambassador for India to
Switzerland and the Honorary Consul of Australia, presented the awards at a ceremony on
Tuesday, 7th of October 2014.

"Improving the energy efficiency of electric motors is critical for the continued development of
India's economy,"  said the Ambassador for India in Switzerland, His Excellency Mr. M.K. Lokesh, who presented the two awards to Siemens Limited. "The SEAD Awards help the market recognize the most efficient products currently available and encourage the
development of new technologies."
Siemens’ 1LA2 series of Low Voltage IE3 induction motors manufactured in India won in the
IEC Induction Motor category for the India region as the most efficient motors thereby providing
the fastest return on investments to the users. The SEAD Global Efficiency Medal helps in
identifying the world’s most efficient products and enhances buyers' ability to differentiate and
choose among products on the basis of their energy efficiency.
Bhaskar Mandal, Country Division Lead, Process Industries and Drives, Siemens India, said, “Every Unit of power saved in India is an investment towards sustaining its manufacturing competitiveness and economic growth. Siemens is at the forefront in developing and introducing highly energy-efficient motors for the Indian market and is also propagating its adoption among end users through education. The ‘SEAD Global Efficiency Medal for Motors’ is of great value not just to us but to our customers as well, who strongly believe in the cause of energy conservation. This recognition is also an endorsement of our investments in local Research & Development backed by world class testing facilities in India.”​
The induction motor is by far the most important type of electric motor found today, and has
become the focus of regulators around the world. Medium-sized motors are of particular
concern because they consume a lot of energy. According to a 2011 International Energy
Agency study, mid-sized motors ranging in size from 0.75 kW (1 hp) to 375 kW (500 hp)
accounted for more than two-thirds of the electricity consumed by all motors worldwide in 2010.They consumed 4,800 terawatt-hours of electricity, more than the combined electricity consumption of Australia, India and the United States. That is why even small improvements in
efficiency of electric motor can have a huge impact on the economy and environment.
While historically SEAD has been awarding ‘Global Efficiency’ medals to various categories
such as televisions, lightings etc., it introduced the category of ‘Motors’ – IEC Induction Motors,
NEMA Induction Motors, New Technology motors less than 75 Kw and New Technology motors less than 100 Kw HP – only in 2014.