Siemens presents the control center of the future 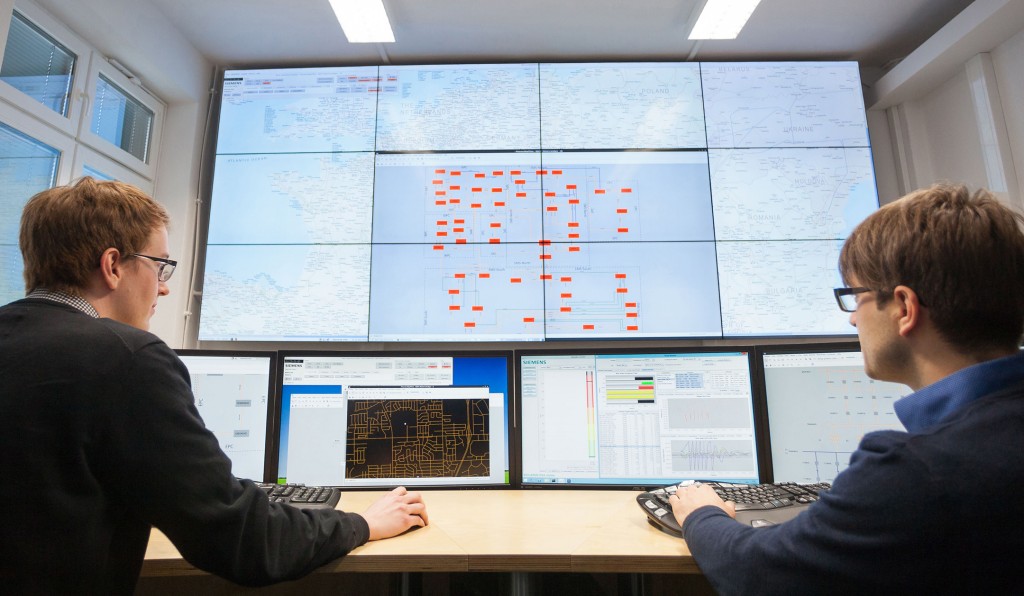 As the number of decentralized generating plants continues to grow while the capacity of conventional power plants shrinks, the electrical power supply system is becoming ever-more susceptible to disturbances. And this means that the time window for responding to critical faults is getting smaller all the time. Improved control and regulation techniques for the control centers that monitor the grid and control it remotely are therefore absolutely necessary.
In the DynaGridCenter project, Siemens is studying ways to visualize dynamic processes triggered by the uneven load distribution in the grid and figuring out how to systematically respond to them. The company is developing assistant systems for the transmission grid. Like a car, the systems have two key functions: The first is to automatically regulate the system so as to maintain the smoothest and most stable "ride" or grid operation possible. The second function is the early detection of obstacles or malfunctions so that they can be "driven around" or avoided. Operators in the dynamic grid control center work to identify the grid dynamics, and they have access to tools that allow them to do what's not yet possible today: systematically respond to verified dynamic grid states.
To monitor the grid, the scientists used a lab grid control center at the Ilmenau Technical University and coupled it to a simulated power grid operated by the Otto-von-Guericke University Magdeburg. Phasor measurement units (PMUs) transmit the level and phase angle of current and voltage at 20 millisecond intervals and therefore add a highly dynamic component to the measured values, which are currently transmitted in the range of seconds. PMU data is synchronized in time and so can be compared directly, allowing unwanted vibration and transient processes in the grid to become visible.
"Until now, we've been able to avoid the dangerous dynamic processes in the grid that can lead to blackouts only by taking preventive measures," Krebs said. Grid operators have to intervene in the schedules of power plants to prevent imminent bottlenecks. Known as "re-dispatch," this intervention incurs costs in the range of up to €1 billion per year. It's easier and, most importantly, more economical to optimize line capacity utilization and take curative measures only in the event of an overload. The new monitoring and control programs can do this, because not only do they visualize the dangerous situations that arise during an overload, they also take the necessary counter-measures much more quickly than can a plant's human staff.
Projected for a three-year period, the DynaGridCenter research project began on October 1, 2015. The project partners were Siemens, the Otto-von-Guericke University Magdeburg, the Ilmenau Technical University, the Ruhr University Bochum, the Fraunhofer Institute for Factory Operation and Automation (IFF) in Magdeburg, and the Fraunhofer Institute of Optronics, System Technologies, and Image Exploitation, Advanced System Technology Branch (IOSB-AST) in Ilmenau. The transmission grid operators 50Hertz Transmission, TransnetBW, TenneT, and Amprion were associated project partners. Siemens was responsible for coordinating the project. The project is part of the Future-Oriented Power Grids initiative and received approximately €5 million in funding from the German Federal Ministry for Economic Affairs and Energy (BMWi). A subsequent project known as InnoSys2030 is now planned to show whether the systems will also work in actual power grids. Another follow-up project will be dedicated to the dynamic digital twin of power grids.

Feature: Siemens presents the control center of the future