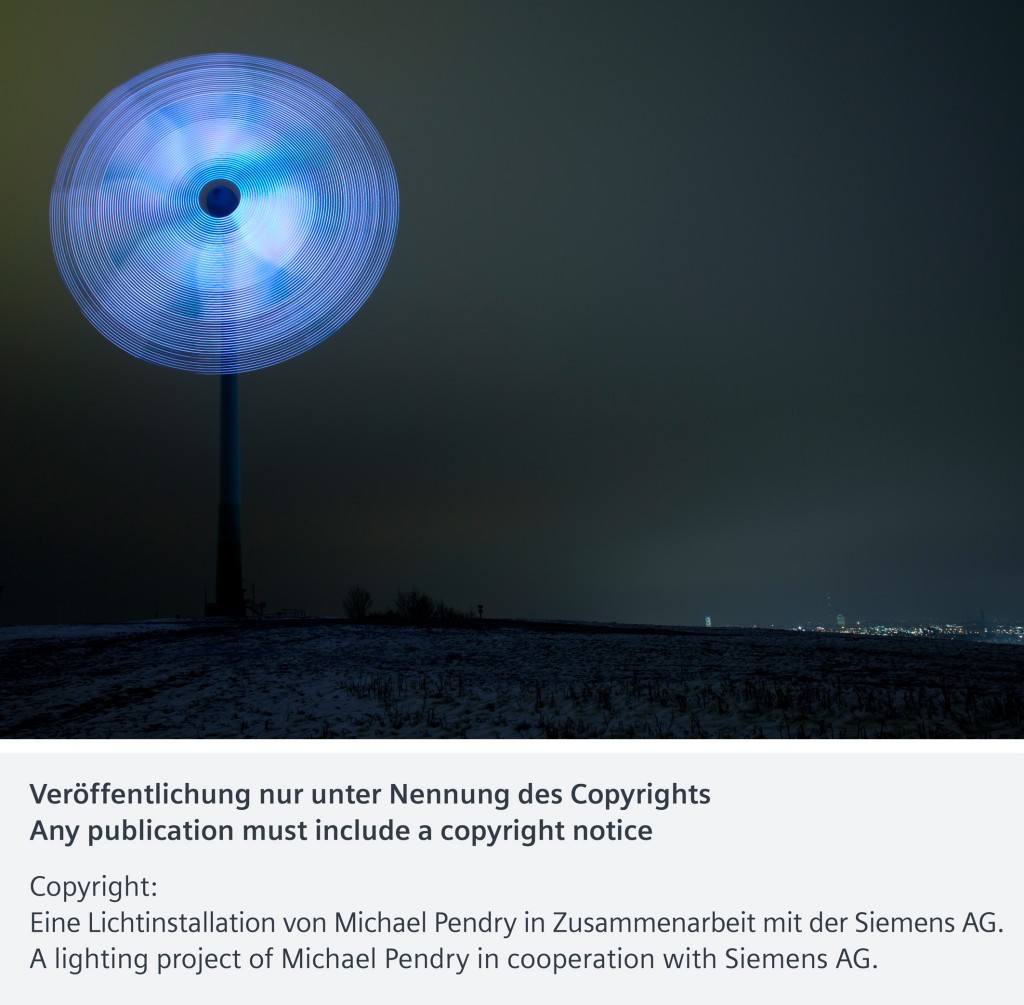 Siemens developed and completed the unique and pioneering technological project together with Munich multimedia artist Michael Pendry over the past twelve months. The lighting installation consists of 9,000 Siemens Osram light-emitting diodes (LEDs) that are as bright as around 20,000 Christmas candles. Yet the entire installation uses only as much electricity as a hair dryer or a water kettle. In good weather, the art object can be seen for 30 kilometers. The span of the world’s biggest revolving Christmas star is nearly 70 meters – as wide as a soccer field.
Nearly 400 meters of power cables were laid for installation – a length that would reach over the top of the Eifel Tower. The lighting installation adds 100 kilos to each rotor blade. The LEDs are fastened to the wind turbine blades with superglue used in space, since under windy conditions the LEDs are subject to forces up to 20 G, or more than three times the g-force experienced by an astronaut during a rocket launch. Just a few days ago, TÜV SÜD – the technical service corporation responsible for inspecting and testing technical installations – gave its final approval to the installation. Munich residents, motorists and airplane passengers can be assured everything is in order.
Because of the wind turbine’s prominent location next to the A9 autobahn – a main traffic artery not far from the airport and used by well over 150,000 motorists a day – it was considered to be ideal for the lighting installation from the very beginning. In the fall of 2008, representatives of Siemens and Munich multimedia artist first discussed the idea of creating a shining symbol for green technologies and sustainability on the eve of the Global Climate Conference in Copenhagen. And what better place to demonstrate the sustainable use of electricity than a wind turbine? The operator of the wind turbine, Stadtwerke München (Munich City Utilities), offered its full support for the project from the very beginning.
In the following months, the idea slowly became reality. At first, the focus was on the project’s technical feasibility. In the spring of 2009, a handful of experts in various disciplines such as wind energy, aerodynamics, lighting and adhesives got together to sketch out all aspects necessary for realizing the project. Answers had to be found for all key issues: How should the LEDs be arranged to have the least possible impact on the wind turbine’s aerodynamics? Which type of LED should be used? Which adhesives were most effective for securing the LEDs in every type of weather?
Late in the summer, the wind energy experts completed their computer simulation analyses on the effects of the installation on the rotor aerodynamics. At this point, tests were begun under real conditions: In wind tunnel tests at the Technical University Berlin, over 15 different configurations of LED models, lighting arrangements and cable routing were analyzed until optimal conditions were found. Tests showed that the LED installation had only a minimal effect on the wind turbine’s performance.
Yet even after the wind tunnel tests were completed late in the summer, all hurdles still hadn’t been taken. Approval from all relevant authorities had to be obtained. And last but not least, the lighting installation had to be attached in only two weeks. 30 technicians worked day and night to make the Siemens Superstar shine. Programming the lighting animation alone took two full days. The lights are coordinated in real time with the various strengths of the wind and speed of the wind turbine itself. A technical masterpiece!

Siemens AG (Berlin and Munich) is a global powerhouse in electronics and electrical engineering, operating in the industry, energy and healthcare sectors. The company has around 410,000 employees (in continuing operations) working to develop and manufacture products, design and install complex systems and projects, and tailor a wide range of solutions for individual requirements. For over 160 years, Siemens has stood for technical achievements, innovation, quality, reliability and internationality. In fiscal 2008, Siemens had revenue of €77.3 billion and a net income of €5.9 billion (IFRS). Further information is available on the Internet at: www.siemens.com.

Born in Stuttgart, Germany, in 1974, the designer and freelance artist Michael Peter Pendry studied interior architecture, stage design and scenography in Rosenheim, Germany. Dividing his time between Munich and London, the artist has worked in design studios in both cities. In 2002, he teamed up with Thomas Halbig to establish Zeitraum, a design and interior architecture firm. At the 2005 Long Night of Music and the 2006 Long Night of Museums, Pendry excited Munich audiences with three installations: Das apokalyptishe Weib, Störung and Sacre Coeur. In 2009, he founded the PENTRY ARTLAB GmbH, a creative multimedia, design and light laboratory and atelier that aims to foster dialogue between the art world and the business community.
Read more
Reference Number: