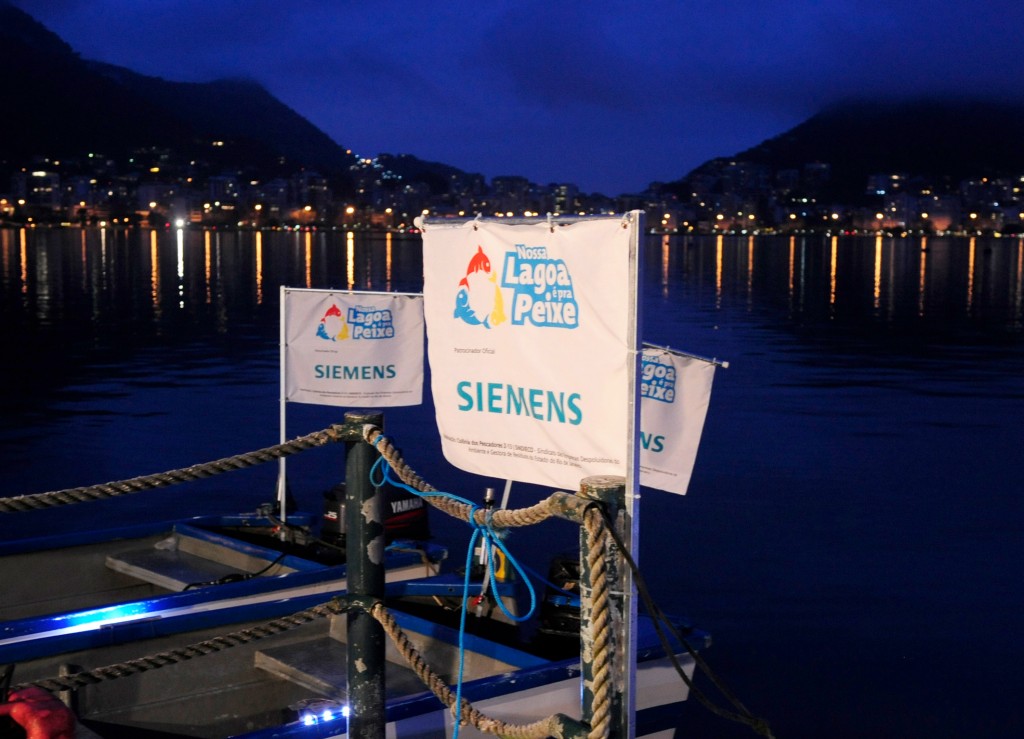 Siemens launches recycling and environmental education project "Our Lagoon is for Fish" on Rodrigo de Freitas Lagoon in partnership with the Z-13 Fishermen Community, Sindico and the Pares Institute, on June 21st . The initiative plans to collect PET bottles and aluminum cans, encourage their correct disposal in the collection points that are all around the Lagoon.

One of the picture postcards of the city of Rio de Janeiro, the Rodrigo de Freitas Lagoon, receives around 120,000 cariocas [local inhabitants] and tourists every weekend, according to estimates from the city administration. In addition to being a meeting point for sports enthusiasts and visitors, the place is a source of income for fishermen who live in the region and make a living from fishing. Over the last few years the Lagoon has been plagued with pollution and has suffered the environmental consequences of the process of growing urbanization. To recuperate the area and contribute to cleaning up the location the local government and private initiative are undertaking various improvement actions.
Siemens, in a partnership with the Z-13 Fishermen Community, Sindieco (the Union of Environmental Clean-up and Waste Management Companies of the State of Rio de Janeiro) and the Pares Institute, is launching the project, "Our Lagoon is for Fish". The initiative plans to collect PET bottles and aluminum cans, encourage their correct disposal in the collection points that are all around the Lagoon and develop an environmental education program for those people who have an interest in the location. All the material will be collected by a specialist company, properly licensed, which will recycle the bottles and cans. If they are collected it will ensure they do not end up in the water, disturbing the fish and polluting the environment, and all the proceeds from the sale of recyclable will be fully reverted to the Z-13Fishermen Community.
The project grew out of the structure adopted in another program for collecting packaging that had already been implemented by local residents in Copacabana by the Z-13 Fishermen Community in 2010, "The sea is not the place for PET" seeks to alert people to the importance of environmental protection. "Our idea is precisely to encourage the recycling process in a more structured way so that local fishermen in their spare time act as environmental agents, by running with the initiative forward and generating income for the Z-13 Fishermen Community", says Ariane López, Corporate Communication Manager for Siemens in Brazil.
Last night, during the launch of the project, local fishermen organized a procession of boats that were all lit up in favor of environmental preservation and cleaning up the Lagoon. On Saturday June 23, employees from Siemens, Rio de Janeiro regional office, and Chemtech, a Siemens Group company, are organizing an awareness task force. The owners of commercial establishments around the Lagoon will be invited by the volunteers to support the project by giving their PET bottles and aluminum cans. In this way they will be contributing to the income that will be passed back to the Z-13 Fishermen Community.
"Our Lagoon is for Fish" is yet one more socioenvironmental action by Siemens directed at preserving the Rodrigo de Freitas Lagoon and at environmental preservation. Last year the company supplied the intelligent automation system that allows for greater control and improved efficiency in the sanitary sewerage system of Rio's South Zone, which contributes to improvements in the quality of the local water. The solution introduced by Siemens is a first for the country in sanitation and provides for the supervision, monitoring and control of the pumping stations responsible for the sanitary sewerage system of the Lagoon catchment area.

More information about Siemens' activities in Rio is available at www.siemens.com/rio20.

Siemens AG (Berlin and Munich) is a global powerhouse in electronics and electrical engineering, operating in the fields of industry, energy and healthcare as well as providing infrastructure solutions, primarily for cities and metropolitan areas. For over 160 years, Siemens has stood for technological excellence, innovation, quality, reliability and internationality. The company is the world's largest provider of environmental technologies. Around 40 percent of its total revenue stems from green products and solutions. In fiscal 2011, which ended on September 30, 2011, revenue from continuing operations totaled €73.5 billion and income from continuing operations €7.0 billion. At the end of September 2011, Siemens had around 360,000 employees worldwide on the basis of continuing operations. Further information is available on the Internet at: http://www.siemens.com.
Read more
Reference Number: