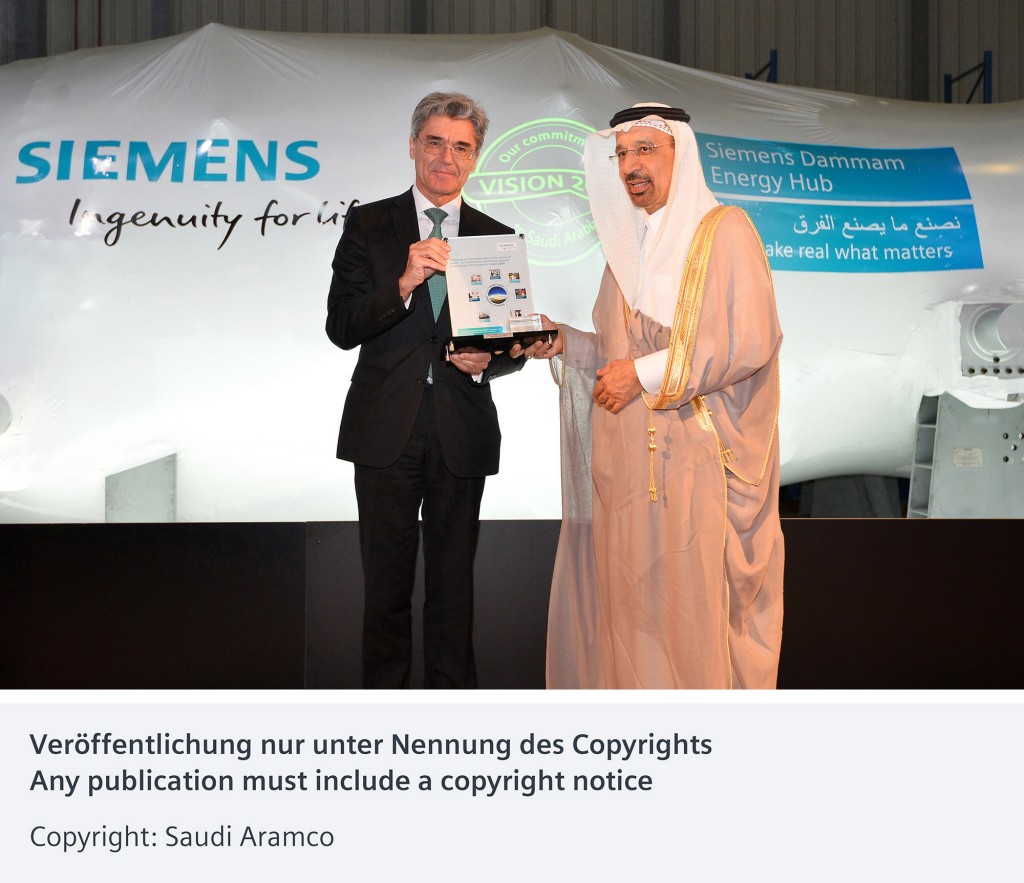 The celebration ceremony of the first "made in KSA" gas turbine on Sunday May 22, held under the patronage of H.E. Khalid A. Al-Falih, Minister of Energy, Industry and Mineral Resources, and attended by Mr. Amin Nasser, President and CEO of Saudi Aramco, welcomed dignitaries from the government, as well as key stakeholders from the private sector.
HE Minister Al-Falih said: "Today we celebrate the first utility-size gas turbine to be assembled here in Saudi Arabia. My thanks and congratulations to everyone at Siemens who has worked hard to make this day possible – including, of course, the qualified young Saudis, trained by Siemens with Saudi Aramco support. This achievement closely aligns with Saudi Vision 2030 announced last month by the Deputy Crown Prince, His Royal Highness Prince Mohammed bin Salman bin Abdulaziz Al Saud, with the full blessing of the Custodian of the Two Holy Mosques King Salman bin Abdulaziz Al Saud."
"While oil and gas will remain fundamental pillars of our economy, the promise of Saudi Vision 2030 will liberate our economy from its over-dependence on oil exports for revenues. Instead, our natural endowments will enable our country's other strengths and capabilities – especially the talent and energy of our youth, and the critical SME sector – in fundamentally new ways."
"Today is a symbol of the win-win-win that can be achieved for suppliers, for Saudi companies, and for Saudi Arabia if we share the same vision and share the same responsibility for making it a reality. The Kingdom is open for companies, like Siemens, to invest further in our economy, our SMEs, and our people, in return for rich rewards – both here in the Kingdom and from resulting exports."
Amin Nasser, President and CEO, Saudi Aramco said, "I congratulate the Siemens team for the delivery of the gas turbine from their largest Middle East manufacturing facility in Dammam Second Industrial City. Working with MODON and Saudi Aramco, Siemens has demonstrated that close collaboration can help realize localization growth opportunities, aligned with Saudi Vision 2030."
Joe Kaeser, President and CEO of Siemens AG added "The Kingdom's Vision 2030 represents the ambitious determination of transforming the nation economically and socially. We sincerely believe that the Vision 2030 is one of the most significant milestones in the Kingdom's contemporary history since the discovery of oil. Siemens and its more than 2,000 employees in the Kingdom will actively support Vision 2030, through localization, innovation and global partnership.
In 2011, Siemens, together with Saudi Aramco and Saudi Electricity Company jointly committed to build the Siemens Dammam Energy Hub as part of the company's continuously expanding local footprint in the Kingdom.
Saleh Al Rasheed, Director General of the Saudi Industrial Property Authority (MODON), said, "When MODON and Siemens signed the land lease agreement for the construction of a manufacturing and service facility in 2012, we had an ambition at that moment, and believed this would be one of many mega projects that MODON has successfully attracted to the industrial cities. Today, we are happy to see that the largest Siemens manufacturing facility in the Middle East to call the Second Industrial City in Dammam its home. We appreciate the efforts that Siemens has invested in training and qualifying young Saudis to achieve true knowledge transfer and the build-up of local capabilities."
Siemens has embarked on a program to train young Saudi talent in advanced gas turbine technologies, both domestically and abroad. The graduates from the program are employed at the Dammam factory and represent the next generation of leaders and experts who will shape the future of the energy industry in the Kingdom.
Arja Talakar, CEO of Siemens Saudi Arabia said, "Today is a historic day for the Kingdom of Saudi Arabia and for Siemens. Together with our partners we were able to give this high-tech gas turbine a new home, with technology built by young Saudi talent, in Saudi Arabia, for Saudi Arabia. That is what we are celebrating today." Siemens has been active in the Kingdom for over 85 years and carries on with its commitment to being an active player in the development of the Kingdom's infrastructure. Dr. Saleh Al-Awaji, Deputy Minister of Electricity and Chairman of Saudi Electricity Company, was among the dignitaries at the event and echoed this sentiment and said "no doubt Siemens is one of the historical partners in the Kingdom, a partner of our infrastructure development, particularly in the power sector".
The event provided an excellent opportunity to underline Siemens' new claim – Ingenuity for Life. Arja Talakar explained that "Ingenuity for Life is the claim that encompasses the unrelenting drive and promise to create value for our customers, employees, partners and society every day, and for an entire lifetime. With ingenuity, Siemens sets the benchmark in electrification and automation, enhanced by digitalization around the globe. Our goal is to serve and advance societies by making our technology and knowledge accessible to more people around the world."
Joe Kaeser concluded, "Since our company's formation, nearly 170 years ago, we have had a clear commitment to thinking and acting in the interest of future generations because we believe that acting responsibly is the only way to achieve a balance between profitable long-term growth, the planet and people. Siemens conducts business to society, and together with Juffali we are ready to jointly identify what lies over the horizon and will leverage our collective strength to serve the Kingdom and its people. Because what is important to Saudi Arabia, matters to Siemens."
Read more
Reference Number: