Siemens detected about 443,000 lightning strikes in Germany in 2017 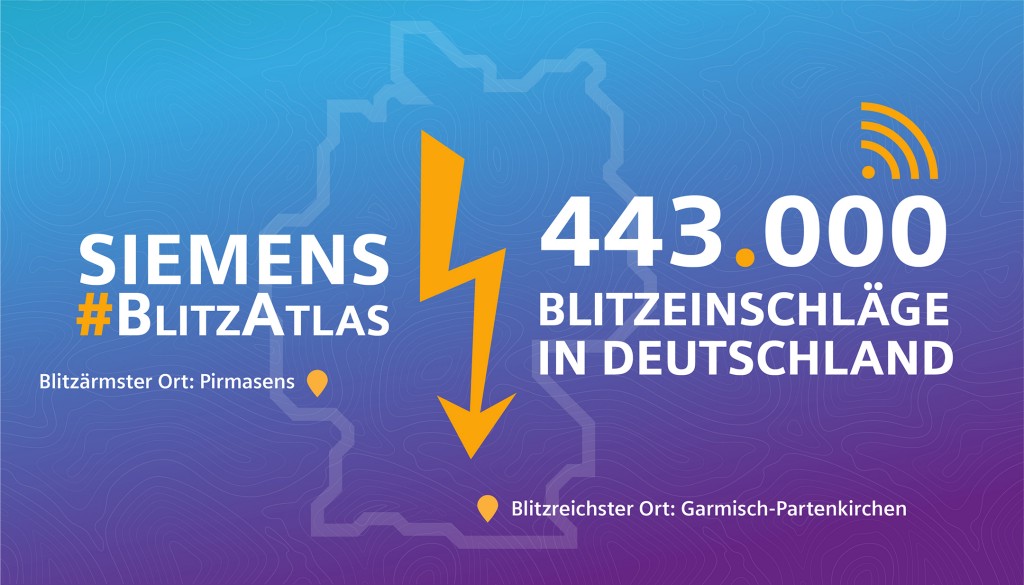 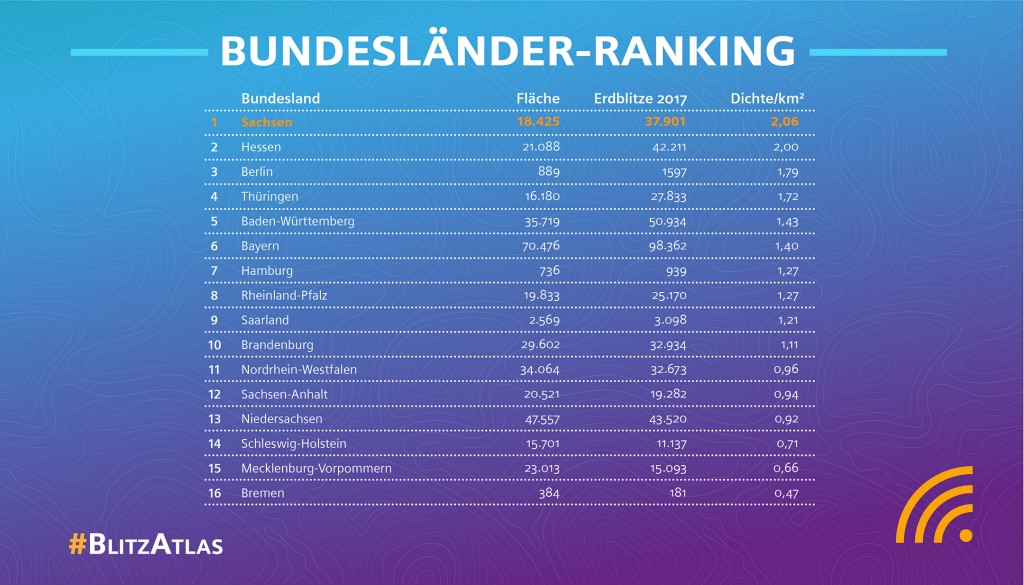 The infographic shows the ranking of Germany's states.

The customers for Siemens' lightning information service are weather services, insurance companies, industrial companies from all sectors, and power-grid operators. "BLIDS can provide evidence that a lightning strike was the cause of damage or downtime," said Stephan Thern, head of Siemens' lightning information service. Lightning causes a great deal of damage to electrical appliances and equipment. The electronics used in devices such as television sets, satellite receivers, washing machines and industrial control systems, for example, are usually highly sensitive, and even distant lightning strikes can damage them. And this information can reduce costs for consumers and end-customers because European insurance policies usually cover lightning strikes. Due to the advances being made in digitalization and to the rapid rise in computational and storage capacities, BLIDS achieves data transfers that are increasingly faster and more precise. Transfers can now be completed within less than 10 seconds after lightning strikes. To achieve this, the lightning service also uses MindSphere, Siemens' cloud-based, open IoT operating system to provide lightning data to customers on their PCs and mobile devices.
"In 2017, we again detected a relatively low number of thunderstorms," said Thern. "Overall, it was too warm. The cold fronts – one of the prerequisites for severe thunderstorms – were not as pronounced. This year's winner, the Garmisch-Partenkirchen district, has consistently been among the top candidates over the past decade. This high ranking is primarily due to the district's exposed location at the foot of the Alps, where cloud masses accumulate."
Among Germany's states, Hesse and Saxony, both with two lightning strikes per square kilometer, took the top spots. As far as the country's state capitals were concerned, Mainz (2.4) was the leader, followed by Wiesbaden (1.8) and Berlin (1.79). Kiel, Düsseldorf and Magdeburg were the state capitals that saw the least lightning in 2017. Overall, the Central Uplands and the districts at the foot of the Alps experienced thunderstorm conditions at a particularly high frequency.
The 2017 BLIDS report will be the first edition to also make data available for Germany's European neighbors. Here, Slovenia in particular – with an average of 4.53 lightning strikes per square kilometer – is emerging as the European region with the most lightning. Ireland and Norway, on the other hand, trail the list with a lightning density of 0.3 in both cases. Siemens' lightning information service uses around 160 connected measurement stations in Europe and supports the measurement network in Germany, Switzerland, the United Kingdom, the Benelux Union, the Czech Republic, Slovakia and Hungary. For its customers, BLIDS works together with other suppliers throughout Europe.
Due to the system's precise measurement technology, the sensors can be set up without difficulty at intervals of 350 kilometers, which significantly reduces the cost of installation, operation and maintenance. BLIDS is constantly expanding this network. The most recently installed station is located in the Greek capital of Athens. "With the latest software, we can detect – to an accuracy of 100 meters – where exactly lightning has just struck, and we do this with an efficiency rate of up to 98 percent. Since 1991, Siemens has been analyzing detected lightning strikes and immediately sending warning notices to our thunderstorm alarm customers – to protect people, technology and infrastructure," said Stephan Thern.