Research alliance for energy systems of the future 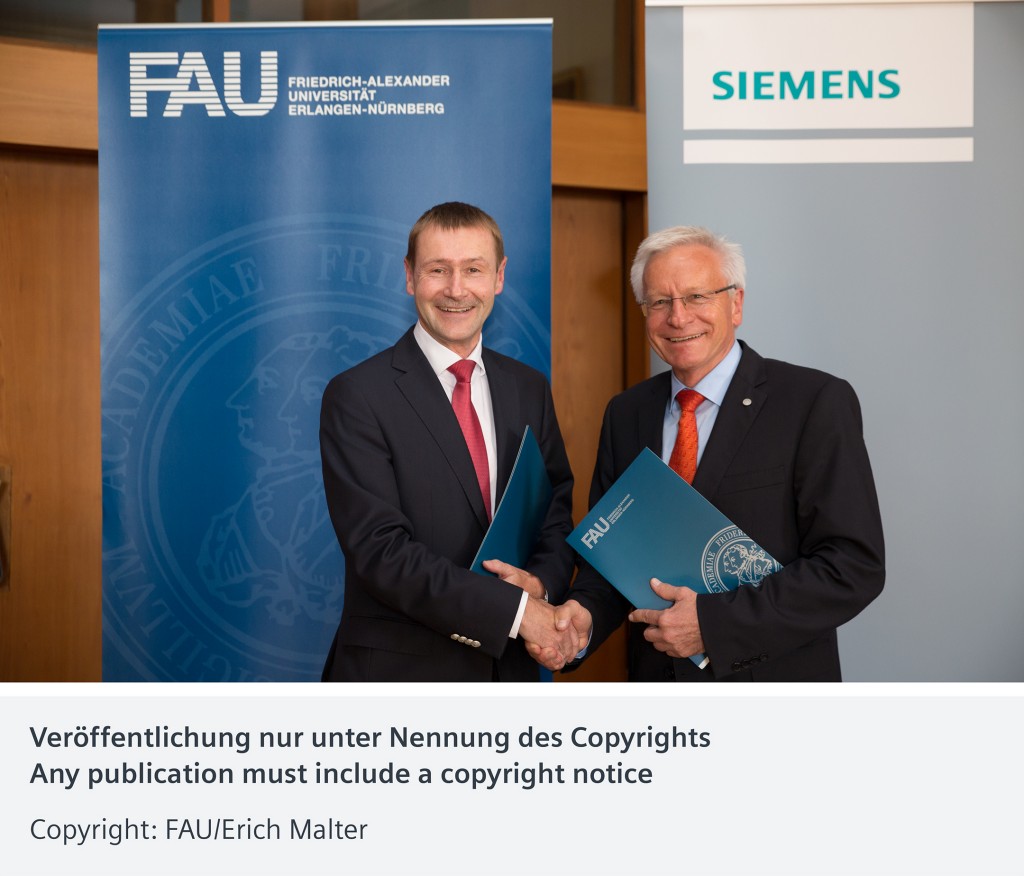 Siemens and Friedrich-Alexander-Universität Erlangen-Nuremberg (FAU) will cooperate in the future to conduct research in sustainable, affordable and reliable energy systems. The alliance aims to develop innovative systems that will remain competitive in the constantly changing energy environment and make a substantial contribution to the success of Germany's energy transition.
The research alliance Future Energy Systems (FES) Campus, which was founded in December 2013, will provide a shared platform for the joint research activities. When brought to market readiness, research results will be either incorporated into the Siemens portfolio or assigned to startup companies. In addition to private-sector research projects, there will also be publicly sponsored projects and research activities with Siemens' key customers – an arrangement that will make the research campus highly attractive not only for companies but also for universities and research institutes. Plans also call for involving German research institutes such as the Helmholtz Association and the Fraunhofer Gesellschaft as well as other German universities and international institutions in the campus's research activities.
Research results will be reported in position papers, which will include recommendations for governments and society on energy supply and the electricity market. Extensive doctoral and post-doctoral programs are also planned. The campus will make a major contribution to strengthening the regional economy and enhancing Germany's standing as a science and business location by, for example, enabling around 50 doctoral candidates to complete their degrees within its framework.
"This cooperation agreement between Siemens and FAU makes it clear once more that – to master the challenges of tomorrow's world – science and industry will have to work hand-in-hand," said FAU President Professor Karl-Dieter Grüske. "It goes without saying that a world-leading industrial company would seek the best partners in this future-oriented field. And FAU is now a true innovation driver in Germany's energy transition – whether in research into new forms of energy storage or in the development of new, more powerful solar cells. The establishment of the Helmholtz Institute for Renewable Energy also underscores FAU's leading position in energy research. We're pleased that our partnership with Siemens will accelerate the journey of many innovations from the laboratory to application in daily life."
"Siemens wants to use its cooperation agreement with Friedrich-Alexander-Universität Erlangen-Nuremberg to strategically foster top-quality research into future energy systems. The Future Energy Systems Campus will be an outstanding partnership between the universities and institutions in the Erlangen-Nuremberg area and Siemens' Corporate Technology Department," said Klaus Helmrich, Chief Technology Officer and Chief Human Resources Officer of Siemens AG. "This new campus in the field of electrification will also make a vital contribution to Siemens' overall strategy," he added.
To finance the campus, Siemens intends to invest an amount in the double-digit million-euro range over the next three years. The company will also add FAU to the list of eight leading universities with which it prefers to cooperate. These universities include RWTH Aachen in Germany, Massachusetts Institute of Technology in the U.S. and Tsinghua University in China.
The first round of research topics will include the green synthesis of chemical energy sources on the basis of renewable energies, plasma gasification of biomass, energy storage systems, power electronics, power converter systems as well as energy-efficient drives and generators.
FAU's Engineering of Advanced Materials Cluster of Excellence, which is already a leading research center, and the Bavarian Hydrogen Center, which is a university partner, are both developing innovative technologies for the German energy transition. By collaborating with the Helmholtz Institute Erlangen-Nuremberg for Renewable Energy (HI-ERN), which was established in 2013, and Siemens' Future Energy Systems Campus, FAU is further sharpening its profile as a leading institution in the area of energy research. For this reason, among others, the German Federal Ministry of Research has appointed FAU President Grüske to the research coordination group of the National Energy Transition Research Platform, which is tasked with consolidating the energy transition's research focuses at universities and non-university institutions.
In the future, the partners of the already existing FES Campus will include not only FAU and Siemens Corporate Technology's Research & Technology Center (RTC) but also the Technische Hochschule Nürnberg Georg Simon Ohm (ELSYS Institute for High-Performance Electronic Systems), the Fraunhofer Institute for Integrated Systems and Device Technology (IISB Erlangen), the Helmholtz Association (with the Helmholtz Institute Erlangen-Nuremberg for Renewable Energy, the Karlsruhe Institute of Technology (KIT) and the Forschungszentrum Jülich) and the Bavarian Center for Applied Energy Research (ZAE Bayern), the Bavarian Hydrogen Center (BHC) and Energy Campus Nuremberg (EnCN).