New universal dimmer for all lamp types and LEDs 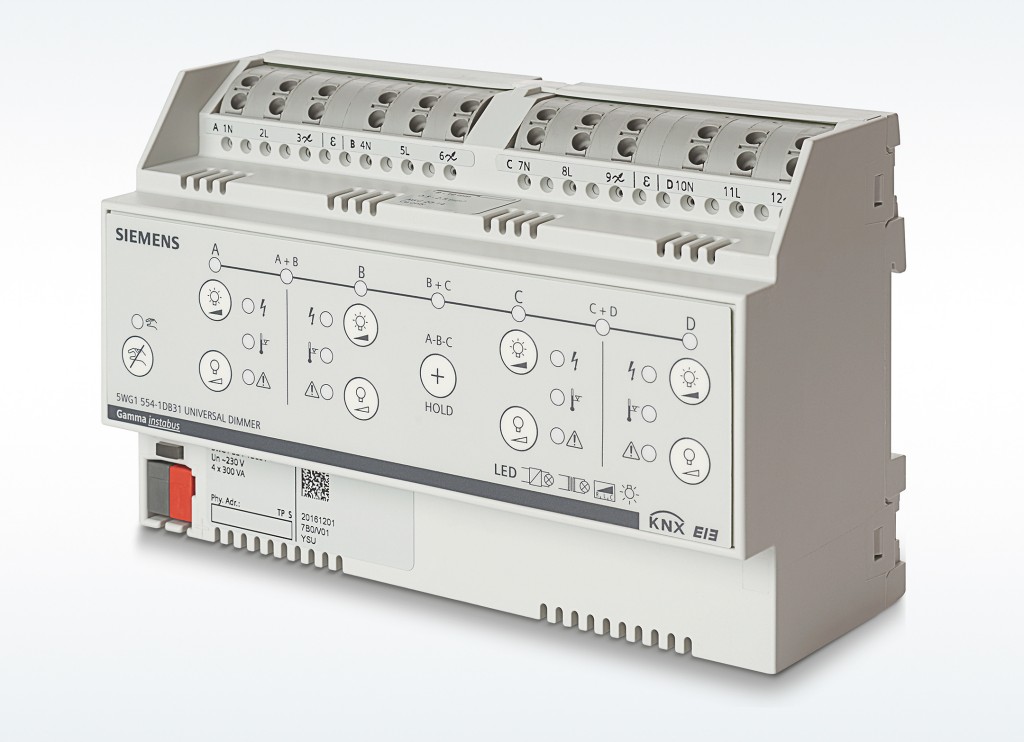 The new N 554 universal dimmer switches and seamlessly dims all types of luminaires. The maximum power per channel is 300 VA, with channel bundling up to 1000 VA. No minimum load is required, even the lowest light intensities of just a few VA can be dimmed reliably. The N 554 has four channels for lighting control, which are also called load outputs. All dimmable lamps are supported, including incandescent and halogen lamps, and especially LED and LED retrofit lamps. The latter are so energy-efficient that they are increasingly replacing conventional incandescent lamps while featuring the same base and a similar bulb, spot or candle design. Because the new universal dimmer supports LED lighting, which is fast garnering the lion's share of the lighting market, it is truly future-proof.
The potentially high lighting load and the adjustable dimming curves of the N 554 universal dimmer make it ideal for chandeliers in museums and historic buildings. This allows building operators to preserve the historical character of the building while using cost-efficient LED lamps and benefiting from the same dimming behavior as with "traditional" incandescent bulbs.
In cinemas, theaters and opera houses, the N 554 universal dimmer can be used for scene control. The four channels support numerous scenes and brightness levels. Using the adjustable dimming curves and various dimming times, a variety of lamps can be integrated into a cohesive overall lighting concept. Other fields of application for the new universal dimmer include hotel and event rooms, retail stores and apartment buildings. KNX installers can select from five different default dimming curves or create their own.
The control panel on the universal dimmer greatly facilitates the installation process. From the control panel, you can easily configure channel bundling and quickly perform manual testing of the installation. This allows installers to fully verify correct electrical installation prior to handover to the system integrator. Further commissioning is done with the manufacturer-independent Engineering Tool Software (ETS).
Like all KNX switch actuators from Siemens, the N 554 universal dimmer offers numerous control, override and diagnostic functions. Control functions (logic, timer mode, scenes, central switching), override functions (manual ON, permanent OFF, blocking, forced control), as well as diagnostic functions (counting operating hours and load cycles with and without threshold monitoring) can be added to the basic functionality via ETS. Maintenance-free push-wire terminals substantially cut installation time for new devices and eliminate the annual tightening that clamping screws require. The KNX universal dimmers can be flexibly integrated with all KNX home and building system components. Universal dimmers detect the connected load type and adjust automatically.
Lighting systems are much easier to design because the new universal dimmer supports all dimmable lamps and does not require a minimum load.