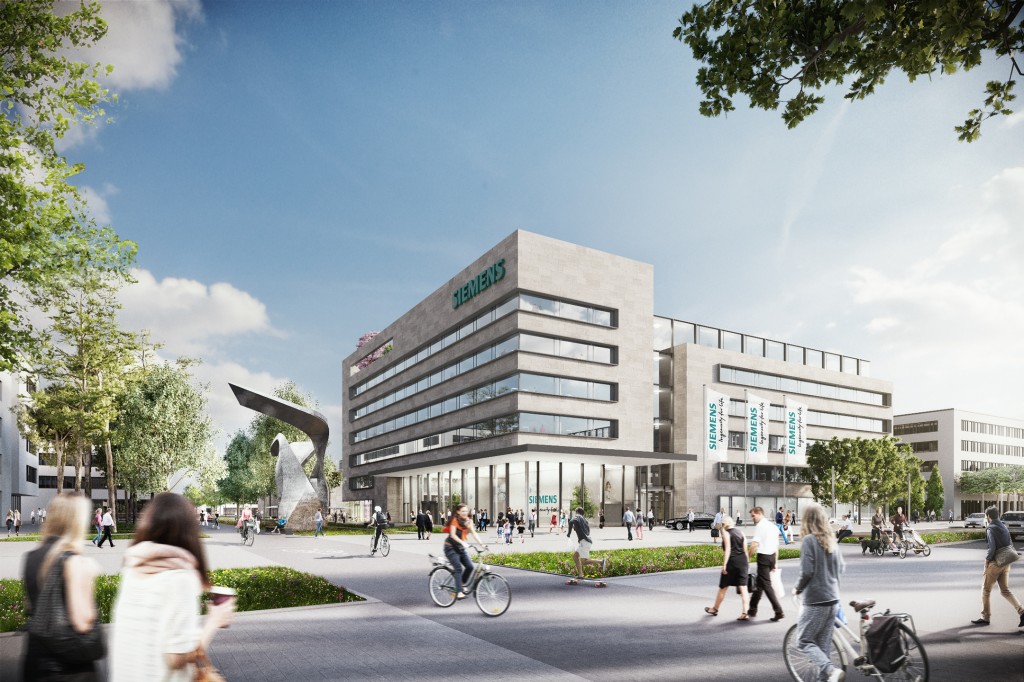 "A decision to build is a decision to stay – Siemens' clear commitment to Erlangen makes Northern Bavaria even more attractive as a business location and provides strong impetus for our state's digitalization strategy. This Siemens Campus is already sending an important signal that reaches far beyond Bavaria and Germany. The digital future is at home in Bavaria," said Bavarian Prime Minister Horst Seehofer in Erlangen.
The head of the city government also has big expectations: "In the years to come, the Siemens Campus will have a strong impact on Erlangen that extends well beyond the southern part of the city. Now that there are concrete plans ready for implementation, it's important to get the people of our city on board. Together, we can take advantage of the opportunity that the project and the winning design offer to enhance urban development and quality of life in Erlangen," said Dr. Florian Janik, mayor of Erlangen and a jury member.
Siemens and the city of Erlangen had invited 12 architecture firms from Germany to enter the architectural design competition for this urban development project. The jury selected KSP's design with a clear majority. The crucial factors leading to this decision were the excellent urban development concept and building plans, which coherently and impressively unite ecological and economical considerations. Prof. Franz Pesch, the chairperson elected by the 22-member jury, explained: "Another decisive aspect was that even the first two phases of construction will make the open character of the Campus clearly visible and enable people to experience it."
KSP's winning design retains the historic building ensemble consisting of the high rise and the plasma physics building and combines them with an east-west axis that can also become wider during continued development of the planning in order to connect both parts of the Campus via a pedestrian bridge leading over Günther-Scharowsky-Strasse. Additional green spaces emanating from this green boulevard lead to the southern part of the Campus. There, two smaller "neighborhood squares" form further focal points. Together with somewhat narrower greenway that extends from east to west, the various elements form a greenbelt encompassing the entire Campus.
In addition to the urban development ideas, the competition also required specific designs for the building complexes to be erected in the first two construction stages. Here, KSP's concept employs office landscapes that can be used flexibly, and it creates spacious working environments that promote the development of all employees in attractive surroundings. The creative collaboration that this facilitates is designed to accelerate the innovations that originate in Erlangen and spread out into the entire world.
The Campus in Erlangen will serve as an innovation center for many of the company's business activities and represent state-of-the-art technology. For this reason, the Campus' new buildings are to meet the highest international standards for sustainability. This approach leads to the creation of an overall system that is impressive from both ecological and economical perspectives and demonstrates Siemens' commitment to excellence.
On a site covering about 54 hectares overall, the Siemens Campus in Erlangen will be realized in a total of seven construction stages. Construction is to begin on the company grounds west of Günther-Scharowsky-Strasse. There, part of the demolition work on the premises will begin before the end of 2015 so that the groundbreaking ceremony can mark the start of construction in the fall of 2016.
With a total of 370,000 square meters of planned building space, this will be Siemens' most extensive construction project worldwide. Siemens Real Estate, which is responsible for managing the company's real estate activities, is running the project. Completion of the first new buildings is scheduled for 2018. All the various construction stages are to be completed by 2030. The overall investment volume amounts to about €500 million.
The models and plans submitted by the 12 architectural offices that participated in the competition will be exhibited in the foyer of the Siemens Forum at Werner-von-Siemens-Strasse 50 in Erlangen beginning on February 16, 2015.

You'll find press conference photos, background information on the architecture firms, and pictures of all the design proposals at www.siemens.com/presse/siemens-campus