In addition to the success achieved in its operations, Siemens rigorously drove progress in the execution of its long-term Vision 2020+ strategy in fiscal 2020. The goal was to give the company’s individual businesses significantly more entrepreneurial freedom under the shared strong Siemens brand. Against this backdrop, Siemens spun off and successfully listed its energy business on the stock exchange as Siemens Energy at the end of September. Including Siemens Healthineers and Siemens AG, the Siemens ecosystem now contains three publicly listed companies.
“The Siemens team delivered a strong finish to a remarkable year. While shaping the structure of the new Siemens, our industrial and earnings performance in the quarter was up year over year,” said Joe Kaeser, President and Chief ExecutiveOfficer of Siemens AG. “After the Energy spin-off and the Flender disposal, Siemens is very well positioned to lead the industrial transformation going forward.”
“Even in these challenging times, Siemens has a very solid financial setup,” added Ralf P. Thomas, Chief Financial Officer of Siemens AG. “In fiscal 2020, we increased our free cash flow considerably once again to reach a ten-year high. We also want our shareholders to benefit from our success. At 3.2 percent, Siemens’ dividend yield continues to clearly outpace the industry average. Supported by our share buyback program and the rerating of our share following the spin-off of Siemens Energy, we’re providing our investors with a highly attractive total shareholder return.”
“For Siemens, October 1 marked not only the start of the new fiscal year, but also the beginning of a new chapter in the company’s 173-year history,” said Roland Busch, Deputy CEO and future CEO. “By rigorously executing Vision 2020+, we’ve turned a conglomerate into a focused technology company. The new Siemens AG has a clear focus: We enable our customers in industry, infrastructure and transportation to successfully transform their sectors. In this way, we play a key role in supporting the backbone of the economy and the basis for sustainable growth.”

Despite the huge macroeconomic turbulence caused by the COVID-19 pandemic, Siemens kept Group revenue stable in fiscal 2020. At €57.1 billion, it was down only two percent year-over-year. At Group level, orders totaled €60.0 billion, a slight decline of seven percent year-over-year. The book-to-bill-ratio remained at the very comfortable level of 1.05.
Adjusted EBITA for the Industrial Businesses declined by only three percent to €7.6 billion, including a positive €0.8 billion effect from Siemens’ stake in the U.S. software company Bentley Systems. This effect was partly offset by severance charges of €0.5 billion. The adjusted EBITA margin for the Industrial Businesses was 14.3 percent (FY 2019: 14.4 percent) and thus stable at a high level.
Discontinued operations reported an after-tax loss of €90 million for the full year (FY 2019: income of €490 million). Overall, net income declined 26 percent for the full year to €4.2 billion, yielding basic earnings per share from net income of €5.00 (FY 2019: €6.41).
Despite less favorable conditions for cash collection, free cash flow rose significantly to €6.4 billion (FY 2019: €5.8 billion) to reach its highest level in the past ten years.

In the final quarter of fiscal 2020, orders and revenue were heavily burdened by negative currency translation effects. Adjusted for these effects, orders even increased by two percent to €15.6 billion. Mobility, in particular, achieved significant growth. Group revenue totaled €15.3 billion – a moderate decline of three percent on a comparable basis. At 1.02, the book-to-bill ratio remained above 1.
In Q4, adjusted EBITA for the Industrial Businesses increased ten percent to €2.6 billion. This increase was driven by a strong performance in the software business and in part by a positive effect related to the stake in Bentley Systems. In addition, there was a €0.2 billion gain from the sale of a business by Smart Infrastructure. This increase was partially offset by €0.1 billion in severance charges.
In Q4, net income increased 28 percent year-over-year to €1.9 billion due to higher income from discontinued operations, which included a pre-tax gain from the spin-off of Siemens Energy. This gain amounted to €0.9 billion net of the related expenses for the full year.
At its software business, Digital Industries (DI) achieved a double-digit percentage growth in orders again in Q4. This growth included a number of larger wins for Mentor. However, DI’s automation businesses continued to face weaker demand, particularly from the automotive and machine-building industries, resulting in a decline in revenue overall. Nevertheless, DI again delivered strong results. The impact on adjusted EBITA from lower revenue was partly offset by expense reductions, including cost savings resulting from COVID-19 restrictions. In addition, this segment booked the positive effect from the stake in Bentley Systems – mostly from a revaluation following that company’s public listing in September. As a result, adjusted EBITA was up 55 percent to €1.2 billion.
Revenue at Smart Infrastructure (SI) declined slightly in Q4 on an adjusted basis, whereby demand in China is already restabilizing. SI’s results from operations benefited from a gain from the sale of a business. Lower results due to a decline in revenue and higher expenses in connection with an ongoing program for improving competitiveness were partially offset by lower expenses due to COVID-19 restrictions. As a result, adjusted EBITA was, at €586 million, seven percent higher than in the prior-year quarter.
On a comparable basis, Mobility’s revenue from July to September remained at the prior-year level. While proceeds from the higher-margin rail infrastructure and service businesses were lower due to the pandemic, the rolling stock business posted gains. With an adjusted EBITA of €241 million (FY 2019: €299 million), Mobility again reported strong profitability.

As a global champion in a leading position from both a business and technology perspective, Siemens Mobility is an integral part of Siemens AG. The business is exceptionally well positioned to differentiate itself from its competitors by merging the real and digital worlds. Siemens Mobility covers the entire value chain and – thanks to the Siemens IoT platform – is a leader in the digital transformation.
In the course of Mobility’s continued development, Intelligent Traffic Systems (ITS) will be carved out by the end of fiscal 2021 to form a separately managed entity. As a separate company, ITS will be able to further pursue its growth strategy, shape the digital transformation of its industry and actively drive market consolidation. In this connection, the unit will leverage its market-leading position in installed systems and drive advances in digitalization.
Offering innovative, smart and comprehensive mobility solutions for roads and cities, ITS is the world’s only supplier of solutions serving all the main regional standards worldwide. Most recently, the unit generated revenue of about €600 million. Since 2013, the compound annual growth rate for orders has totaled eight percent.

For its outlook for fiscal 2021, Siemens assumes that the COVID-19 pandemic will not have a long-lasting impact on the world economy. Given this condition, the company expects a fairly robust return to global GDP growth. While the company anticipates that important customer industries for Siemens will continue to face challenges related to the pandemic and industry-specific structural changes, and that this will cause growth in global fixed investments to lag behind GDP growth, Siemens expects improved conditions particularly for its high-margin short-cycle businesses in the second half of fiscal 2021.
Siemens further anticipates that negative currency effects will strongly burden both nominal growth rates in volume and Adjusted EBITA for Siemens’ Industrial Businesses in fiscal 2021. For comparable revenue, net of currency translation and portfolio effects, the company expects the Siemens Group to achieve moderate growth and a book-to-bill ratio above 1.
Digital Industries expects fiscal 2021 comparable revenue to grow modestly year-over-year. Adjusted EBITA margin is expected at 17 percent to 18 percent.
Smart Infrastructure expects to achieve moderate comparable revenue growth in fiscal 2021. Adjusted EBITA margin is expected at 10 percent to 11 percent.
Due mainly to executing its large order backlog, Mobility anticipates mid-single-digit comparable revenue growth in fiscal 2021. Adjusted EBITA margin is expected to be 9.5 percent to 10.5 percent.
Assuming the expectations described above are fulfilled during fiscal 2021, Siemens anticipates net income to increase moderately from €4.2 billion in fiscal 2020 despite the strong currency headwinds.
At the beginning of fiscal 2021, Siemens – as part of the ongoing rigorous execution of Vision 2020+ – sold Flender GmbH, the leading manufacturer of mechanical and electrical drive systems, to the investor Carlyle. The criteria for classifying Flender’s business as held for disposal and discontinued operations will be met in the first quarter of fiscal 2021. 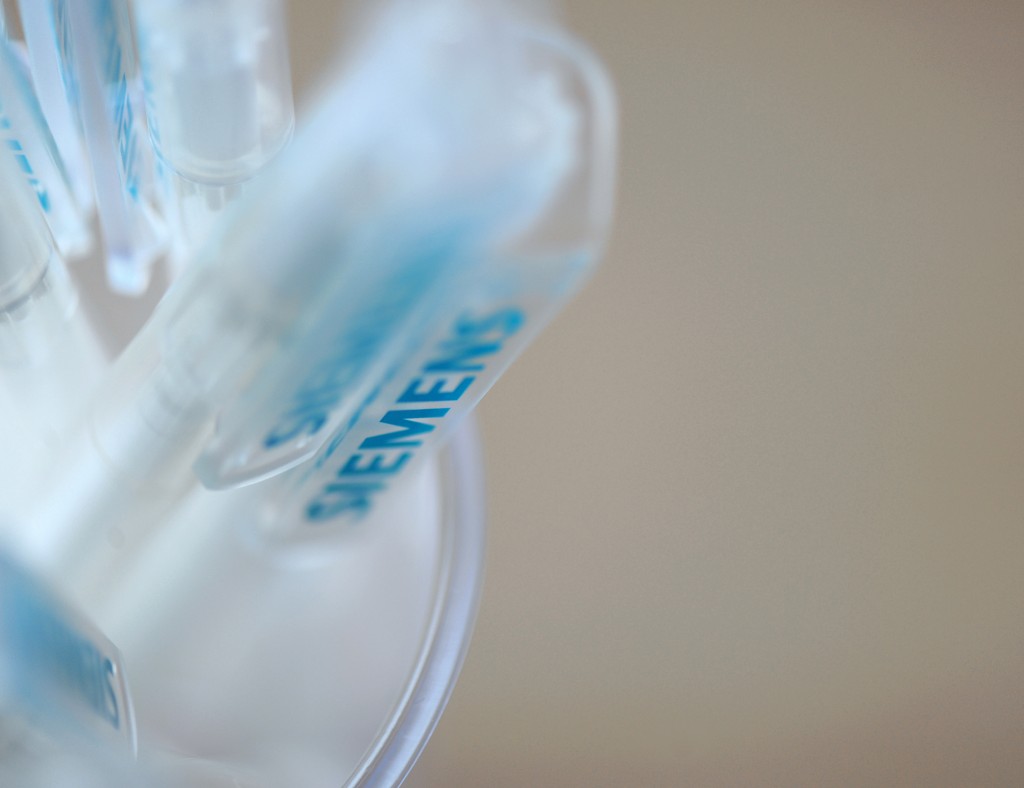