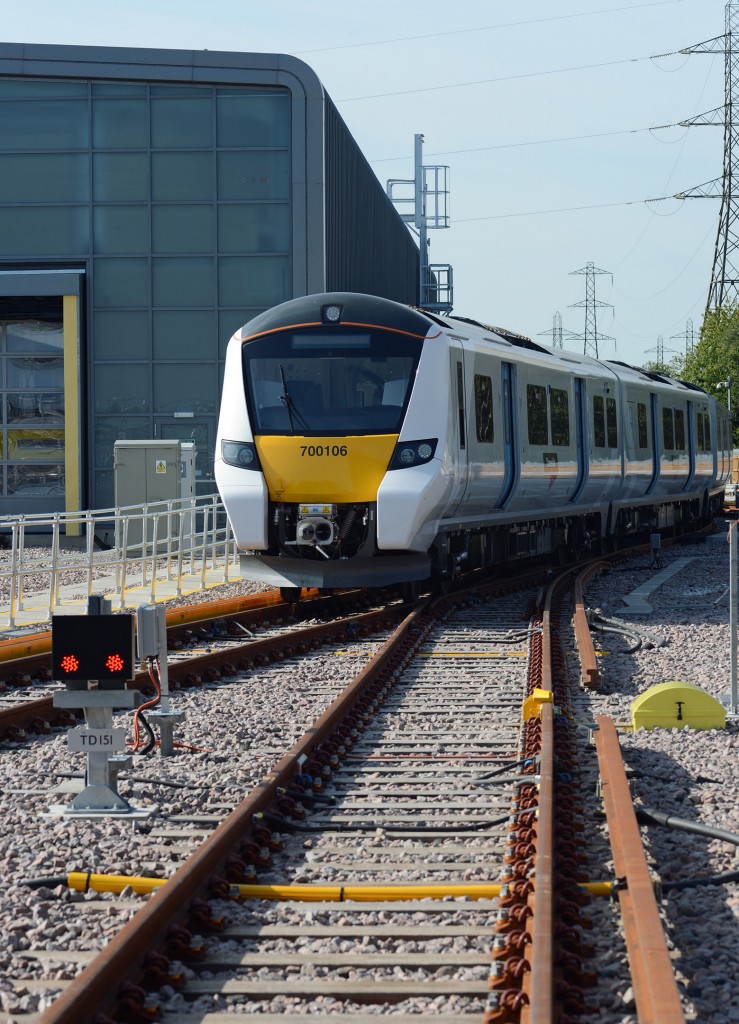 Siemens and operator Govia Thameslink Railway (GTR) will now be undertaking an exhaustive testing programme. Passenger service will begin in spring 2016 on the Thameslink network between Bedford and Brighton and later on routes to and from Cambridge and Peterborough as well as to other destinations in Kent and Sussex.
UK Rail Minister Claire Perry said: "We are investing record amounts building a world-class railway that provides more capacity, more services and better journeys. The Class 700 trains will transform rail travel for customers and provide a massive jobs boost for Britain and a significant boost to our economy. The arrival of this first train is a huge step forward for the Government-sponsored Thameslink Programme, which is creating thousands of jobs across the country and is a vital part of our long-term economic plan. I am looking forward to these spacious new trains being introduced across London and the South East on schedule from spring next year providing quicker, more reliable and more comfortable journeys for millions of customers."
"The arrival of the first train into our new Three Bridges depot is a real milestone for us at Siemens. Building the Class 700 Desiro City trains is, and continues to be, one of the most important projects at Siemens. The arrival of this first train signifies major progress in the project, and we are looking forward to the start of service next year", said Jochen Eickholt, CEO Siemens Mobility Division.
The trains feature intelligent air conditioning, wide doors and open through-carriages which contribute to a more accessible and comfortable passenger experience. They will also bring the following benefits to commuters in 2018 in the morning three-hour peak:
In welcoming the new trains, GTR's Programme Director Keith Wallace said:
"The new Class 700 trains will bring many changes and benefits to our passengers - from more frequent services on longer trains, to greater capacity, easier access, better on-board information, and an altogether better train environment. We're looking forward to our passengers seeing them in service next spring."
"I am delighted to see the first Class 700 train arriving in the UK in what is another significant project milestone. The next few months will see a series of tests completed before the train takes its first outing in passenger service on the UK rail network – another step forward in ensuring the train is completely ready for passengers," added Andy Pitt, Executive Chairman of train owners Cross London Trains (XLT).
The delivery of this first train is part of the Government-sponsored Thameslink Programme of infrastructure improvements and new trains to transform north-south travel through London, reduce crowding, increase capacity and improve reliability on one of the busiest routes in the UK.

You will find this press release, press photos and other material on this topic at: www.siemens.com/press/thameslink
Further information on the Mobility Division is available at www.siemens.com/mobility