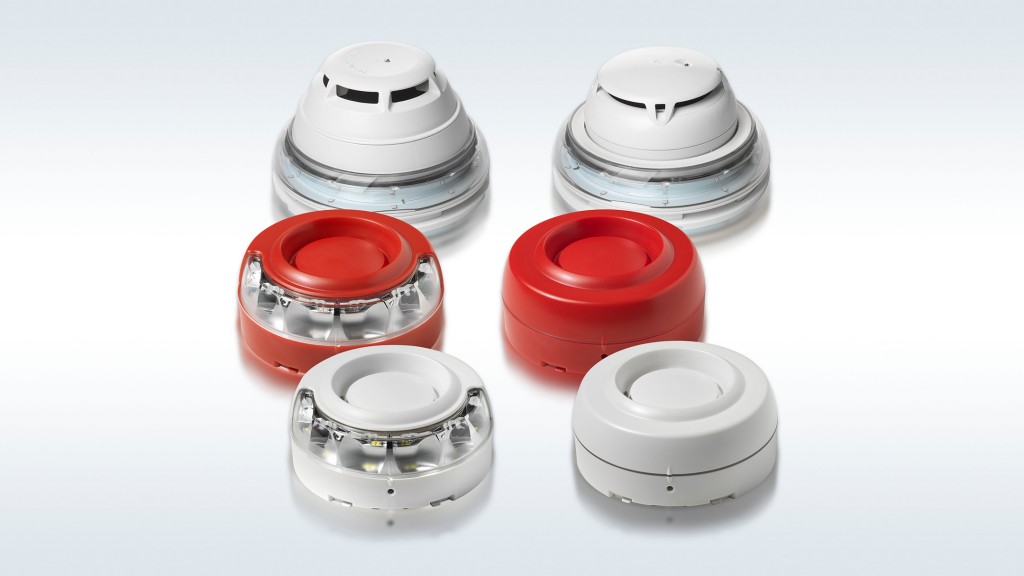 The new products address evolving market developments for close integration of voice alarms with fire protection systems. Experience has shown that in the case of a fire or another dangerous situation, a simple alarm tone is often not observed but instead misinterpreted as a false alarm or as a drill. As a result, the persons who need to be warned either don't react or react belatedly. Speech-based alarms keep evacuation times as short as possible and minimize the risk to people.
The sounders feature 16 integrated tone patterns and three different sound levels (Min/Mid/Max), with the highest sound pressure being 99 dBA. The voice sounders have the same features as the sounders, but in addition contain messages that can be emitted in two languages along with an attention tone. In total, 15 languages are available in five pre-defined message categories: fire evacuation, emergency evacuation, alert, test and all-clear. The tone and voice messages are compliant with EN 54-3 and synchronized in an audible area and across all loops of a panel. Voice messaging, especially if it is in two languages, improves the reaction time, particularly for people who are not familiar with the building. Beyond the standard offering, the portfolio includes customized devices where any languages, message categories and tones can be incorporated.
The optical alarm devices feature three beacon settings in accordance with EN 54-23, which can be tailored to different room sizes and detector coverage areas. They have an extra setting that supports the use of the device with supplementary optical indication to save power. In addition, they are designed for use in system extensions and modernizations. All devices are addressable, loop-powered, and available with red and white LEDs.
To improve evacuation performance, a shorter pulse length with higher illumination is built into the beacons because studies have shown that this combination increases awareness in the case of an alarm. Beacons with these features are especially valuable in areas with loud ambient noises where acoustic signals are easy to miss. In addition, they help reach people who are hearing-impaired, wearing ear protection or using headphones.
Going a step further, Siemens increases the reliability of its alarm devices through daily disturbance-free self-tests of the electrical circuit, loudspeaker and light source. Very low levels of sound and light are emitted during testing so as not to disturb occupants. On a system level, the fire control panel can silently activate all alarm devices. The test results show if the power is sufficient for each alarm device, or if there is an overload or a wiring problem on the loop.
Following the standard for all Siemens fire safety peripherals, the alarm devices have an outstanding recovery time in compliance with EN 54-17. In case of a short circuit on the loop, the integrated line separator ensures that the alarm devices continue to work under any condition.

Siemens Smart Infrastructure (SI) is shaping the market for intelligent, adaptive infrastructure for today and the future. It addresses the pressing challenges of urbanization and climate change by connecting energy systems, buildings and industries. SI provides customers with a comprehensive end-to-end portfolio from a single source – with products, systems, solutions and services from the point of power generation all the way to consumption. With an increasingly digitalized ecosystem, it helps customers thrive and communities progress while contributing toward protecting the planet. SI creates environments that care. Siemens Smart Infrastructure has its global headquarters in Zug, Switzerland, and has around 71,000 employees worldwide.
Read more
Siemens AG (Berlin and Munich) is a global technology powerhouse that has stood for engineering excellence, innovation, quality, reliability and internationality for more than 170 years. The company is active around the globe, focusing on the areas of power generation and distribution, intelligent infrastructure for buildings and distributed energy systems, and automation and digitalization in the process and manufacturing industries. Through the separately managed company Siemens Mobility, a leading supplier of smart mobility solutions for rail and road transport, Siemens is shaping the world market for passenger and freight services. Due to its majority stakes in the publicly listed companies Siemens Healthineers AG and Siemens Gamesa Renewable Energy, Siemens is also a world-leading supplier of medical technology and digital healthcare services as well as environmentally friendly solutions for onshore and offshore wind power generation. In fiscal 2018, which ended on September 30, 2018, Siemens generated revenue of €83.0 billion and net income of €6.1 billion. At the end of September 2018, the company had around 379,000 employees worldwide. Further information is available on the Internet at www.siemens.com.
Read more
Reference Number: