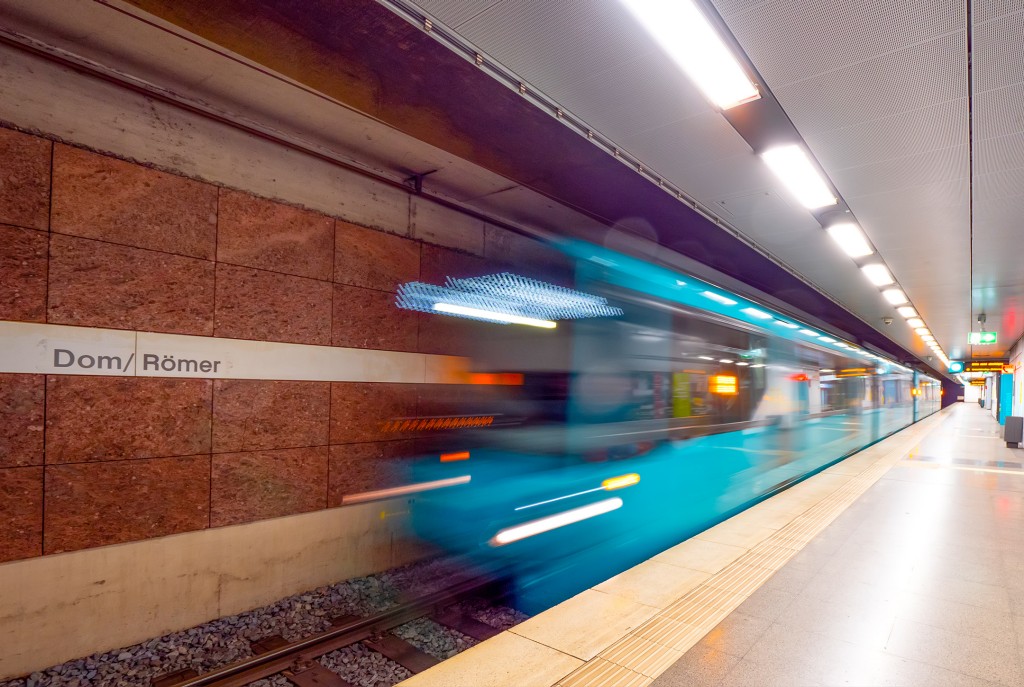 “The digitalization of the train control system with the “DTC” is a project that will not only have outstanding importance for Frankfurt’s public transport network in the coming years but will also make the city and the VGF leaders nationwide,” said Frankfurt’s Cabinet Member for Transport Stefan Majer about the project. “The DTC will mark the first time a Communication Based Train Control System (CBTC) is used in a German city.” The technology will wirelessly and digitally link metros and trams with one another in real time. This will allow trains to operate at shorter intervals and, in turn, enable the VGF to significantly expand its capacity without having to convert or build new rail lines or stations.
Majer, Frankfurt’s Cabinet Member for Transport, emphasized the project’s possible connection with “Frankfurt MIND(+)”, a parallel project. “The DTC can be linked to individual traffic via the city’s central traffic computer. This would make fully integrated traffic control possible for the first time in a major urban center in Frankfurt and Germany – nothing less than a milestone in the country’s mobility transition.”
Long-term partnership between VGF and Siemens
On the planned awarding of the contract, VGF CEO Michael Rüffer said, “We’ll be converting the train control system for our entire metro network to DTC, followed by the tram network. To achieve this, we need a powerful and competent partner – which we’ve found in Siemens Mobility. We’re especially pleased to be continuing a partnership with Siemens that was already a successful model back in 1899, when Frankfurt put 181 classic Siemens trams into service.”
“More than 40 cities worldwide already trust our Trainguard MT CBTC solution. We are proud that we can use this innovative technology for the first time in Germany at the VGF. Our technology combines maximum availability, maximum line capacity, shortened intervals, and up to 20% less energy consumption with the highest possible level of safety,” said Andre Rodenbeck, CEO Rail Infrastructure at Siemens Mobility. “In the future, metro trains in the Frankfurt network will be able to run every two minutes.” 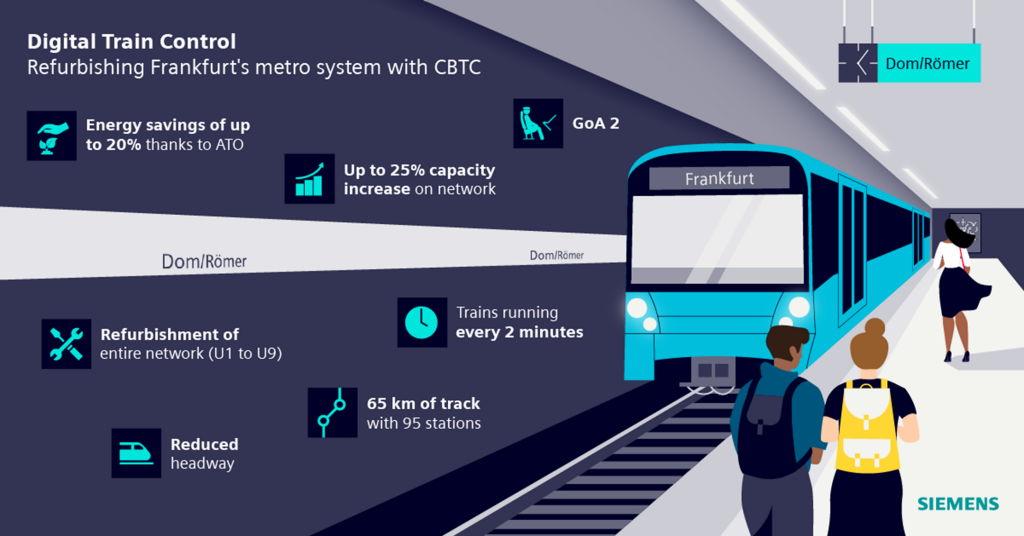 Financial support for the project
The importance of this mobility milestone can also be seen in the project’s financial scope: On Monday, December 13, 2021, Hessian Minister for Economic Affairs, Energy, Transport and Housing, Tarek Al-Wazir, officially granted funding of €95.5 million to the VGF to co-finance the project, together with the Federal Government and the state of Hesse.
What is “Communication Based Train Control”?
Digital train control systems such as the DTC Frankfurt are known in the industry as Communication Based Train Control (CBTC) systems. All nine lines of Frankfurt’s metro system are to be converted to digital train control by 2031. The conversion will begin with the “B route” (lines U4 and U5), including the U5 extension to the Europaviertel, and is currently planned to begin operation in 2025.
CBTC functions as a complex system of signals and messages that enables permanent exchanges between trains and rail infrastructure in real time. Various components on the rail line and in the trains enable this radio-based, bidirectional data communication between trains and infrastructure so constantly transmit route-relevant information to the trains. A short film produced by the VGF clearly explains the complex system and is available for viewing on the company’s innovation website:  DTC - Innovation VGF (vgf-ffm.de)
What are the advantages of digital train control?
This form of data transmission makes it possible to dispense with conventional signals, which reduces maintenance costs. In addition, the VGF can use the digital train control system to increase the capacity and efficiency of its routes, particularly in the underground sections.
Expanding services – offering more trains and shorter intervals, which is essential for achieving a mobility transition including a general switch from cars to public transport – is the central aspect of rail modernization. CBTC systems enable trains to run in what is known as a “wandering spatial distance”, which means that the trains operate with just the braking distance between them, rather than in fixed block sections as at present. This makes it possible to run trains at shorter intervals, which will enable the VGF to increase its capacity by up to 25 percent – for example on the “A route”, served by Lines U1, U2, U3 and U8 – without having to expand or construct new lines, which is not only expensive and often draws protests, but also takes considerable time.
State-of-the-art, high-performance train control technology not only enables more trains to operate on a route, but also ensures greater punctuality and reliability. The system enables more energy-efficient driving – with savings up to 20 percent possible – and provides greater passenger comfort through gentler acceleration and braking. This, in turn, also reduces wear and tear on both trains and rails.
All in all, a CBTC train control system will increase the capacity and attractiveness of the metro system, which is ultimately intended to increase the share of public transport in urban traffic. This will directly contribute to a reduction of pollutant emissions and ensure cleaner air in the city.
“Digital Train Control System Frankfurt” or “CBTC”?
“Digital Train Control System Frankfurt” is the name used by the VGF for a digital CBTC train control system. The basis for introducing the system was created in the company around three years ago. Our press release of December 20, 2019, which is available on our website, contains further information on the relationship between public transport and private motorized transport, as well as on the federal funding of the project.