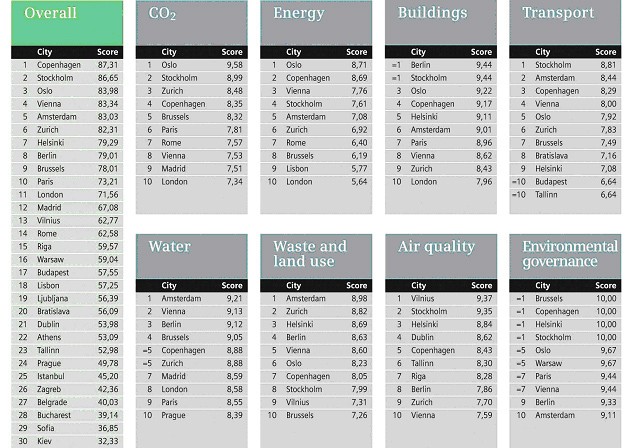 “Our analysis indicates that European cities are leaders in environmental performance. In particular, almost all of the 30 cities — which are home to a total of nearly 75 million inhabitants — average lower per capita CO2 emissions than EU countries,” said James Watson, managing editor at the Economist Intelligence Unit and the editor of the study. The best city in this category, Oslo, emits only 2.5 tons of CO2 per capita and per year, far less than the EU average of 8.5 tons. What’s more, almost all of the cities have already developed and partially implemented an environmental strategy. “All of the cities face formidable challenges, however. For example, renewable sources of energy currently account for only around seven percent of these cities’ energy supply, which is significantly under the target of 20 percent set by the EU for 2020,” said Watson. Furthermore, the average share of waste that is recycled is less than 20 percent, while one in four liters of water is wasted through leakage.
Scandinavian cities generally achieve high scores. Awareness of environmental protection in these cities has been strong for years, which is reflected in the cities’ ambitious climate targets. Copenhagen, for example, aims to be carbon free by 2025. In Scandinavian countries, GDP per capita income is above average, and these wealthy countries have invested substantially in environmental protection. So far, Eastern European cities generally rank lower. This is largely due to a comparatively low gross domestic product and historic burdens, including the lack of attention paid to environmental protection in previous decades. In particular, high energy consumption in buildings and outdated infrastructures reflect this. In the area of public transportation, however, Eastern European cities often score above average: Kiev, which is ranked 30th overall, is estimated to have the highest percentage of people using public transportation to commute.
The scope of the European Green City Index is unique. The eight categories are based on 30 individual indicators — 16 of which are quantitative (e.g. consumption of water and energy per capita, recycling rate, and use of public transportation) and 14 qualitative (e.g. CO2 reduction targets, efficiency standards for buildings, and support for environmental protection measures). The Economist Intelligence Unit developed the index and wrote the report in cooperation with Siemens. “As far as possible, the research is based on data from official sources, such as municipal statistics departments and city governments,” said Watson. The study also includes in-depth city portraits that reveal the strengths and weaknesses of each urban center, while also highlighting initiatives and projects from which other cities can learn. “A key element of the study is the comparability of the results from each city — within both the individual categories and in the overall evaluation,” added Watson.
The European Green City Index is the third Siemens study to date in the Sustainable Urban Infrastructures series — after sustainability reports on London and Munich. “With this analysis we are once again underscoring our commitment to helping cities with their climate protection measures,” said Achatz. “After all, they play a key role, given that they are responsible for 80 percent of all greenhouse gas emissions and that more than half of the world’s population lives in cities today.” Siemens’ environmental portfolio makes it an ideal partner for the implementation of climate-friendly infrastructure solutions. In fiscal 2009, the company generated about €23 billion in revenue with the products and solutions of its environmental portfolio. That is approximately 30 percent of its total annual revenue.
The ranking results of the European Green City Index:
Notice: The press conference in Copenhagen will be broadcast live in the Internet beginning at 10.30 a.m. (CET) at: www.siemens.com/press/greencityindex. You can ask questions via e-mail to pressconference@siemens.com