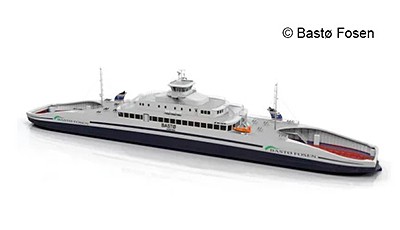 Moss-Horten transports 1.8 million vehicles and 3.7 million travelers across the Oslo Fjord annually. Siemens will provide an energy storage system that includes a 4.3 MWt battery   pack and an Energy Management System  that will be used on board the new ferry beginning in January 2021. This will be the world's largest battery range built for full-electric operation, and the largest battery pack ever delivered to a Norwegian ferry of this size. Siemens will also provide battery charging infrastructure to be used for record fast charging when the ferry is docked.
The Moss-Horten ferry route pattern requires charging at a very high voltage with up to 7.2 megawatts (7200 kW), placing great demands on the batteries on board the ferry. With such a high charging power required over a short time, the batteries produce a significant amount of heat. This heat could be distributed across many batteries, a costly solution that would require the use of many batteries. Instead, Siemens’ provides a much more cost-efficient technology with a water-cooled battery that cools to an optimal level.


Initially, the ferry will be powered by electric energy approximately 65 percent of the time, as it can only be charged on the Horten side of the route where there are charging facilities. Once a charging station arrives in Moss, the ferry will run 100 percent on electric energy.
Compared to a conventional ferry, an electric ferry with batteries saves the equivalent of 3400 new petrol cars’ CO2 emissions.* A 2015 study from Bellona and Siemens concluded that it would be profitable to replace 70 percent of the ferries in Norway to either battery or hybrid operation. Transitioning Norwegian ferries alone to a battery or hybrid operation would reduce CO2 emissions by 300,000 metric tons, approximately nine percent of the total emissions of domestic shipping.
“Ferries are the perfect match for renewable energy,” says Ketil Aagesen, Head of Sales, at Siemens Offshore and Marine Center. If the green shift is to be implemented globally, other countries' authorities should look to Norway to see how cost-effective it can be to convert ferries to low or zero emissions.”
* Calculations made by Enova and Bastø Fosen. The calculation is based on an average annual mileage of 12 140 km / year (cf. Statistics Norway) and average greenhouse gas emissions of 94 grams per kilometer driven for petrol cars sold in 2018 (cf. OFV). Simple calculations from Siemens show that there are about 2,300 ferries worldwide, of which 1,300 are older than 25 years. If we assume that both the operating pattern and the size of these ferries are similar to the Norwegian ones, then converting these to electric energy would eliminate 1.3 million metric tons of diesel, reducing reduce CO2 emissions by almost 4 million metric tons.
MediaService application reports may be based on previously published Siemens technical articles.